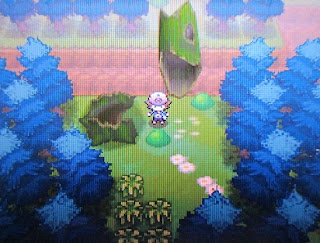 My Pokemon itch awoke lately and begged to be scratched, and I was more than happy to comply. My gaming instinct elected Pokemon Black as the entry that should be played, and it was not long before I stuffed the cartridge in my DSi and created a brand-new save with a male Trainer that I fittingly named Noir. (For the record, my plan is to pick up the female trainer when I play Pokemon White and call her Blanche. Such a perfect set-up!)

I decided right away to indulge in yet another Solo Run, since this is by far my favourite way of playing Pokemon games. The Nuzlocke Challenge can wait a trifle longer! However, my enthusiam was seriously doused by the discovery of the starters, whose bizarre looks didn't please my retinas in the slightest. I finally chose Oshawott, with the secret intention of ditching him as soon as I encountered a more gracious 'Mon. I didn't have to wait long for that fateful encounter: as soon as I set foot on Route 2, I got entangled in a fight with an adorable Purrloin in the tall grass, and there was no turning back. I knew right away that this purple cat would be my One and Only and that we would cruise together all the way to the summits of the Elite Four. Or not—but more on that very soon.

The first two Gyms were quite a pain, I have to admit. My Purrloin—affectionately renamed Purry—had only crappy Normal moves at her disposal and struggled in battles, and I needed to grind a fair bit to be able to conquer both Gyms—so much so that I started fearing that maybe that lovely purple feline was not a 'Mon fit for a solo run. Fortunately, the obtention of the  powerful Dark move Pursuit at Lv.15 made things considerably smoother and I started gaining the upper hand in fights, slowly but surely. 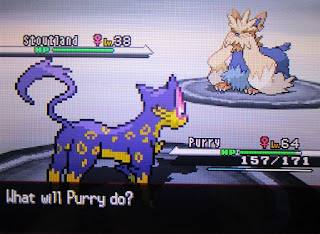 Eighteen hours and a glorious evolution in Liepard later, I can pretty much one-shot every 'Mon crossing my path, and as usual, it feels amazing. I only had a bit of trouble with Elite Four Trainer Marshal, whose Fighting 'Mons knocked my Purry out more than once; but this unexpected struggle made things all the more thrilling. Then came the fight with Reshiram, which was over so fast that I nearly felt sorry for this poor Legendary. I'm always reluctant to capture these noble beasts, and I wish the games would stop forcing me to do so. It feels so annoyingly trivial and disrespectful to capture these unique 'Mons that are nearly akin to deities, and I cannot help but release them as soon as I can—and Reshiram was no exception. And since I'm mentioning this whole subject, I encountered later a Tornadus on Route 12, which I neatly pummeled into oblivion without being aware that this was a Legendary. I would still have pummeled it into oblivion if I had been aware of its nature, mind you; but I would have done so with more reverence.

I am still stationed on Route 12 to this day, and I don't think I will go any further, despite the fact that I technically didn't beat the Elite Four and the Champion. This untimely desertion is solely to blame on the game itself, which had the audacity to force me to fight the Elite Four twice. Such insolence! Infortunately, the first confrontation with the Elite Four was followed by the end of the main story and by the credits, which triggered the usual vertiginous drop in my drive that always prevents me from clearing postgames. Plus, in my mind, I have already beaten the Elite Four as well as an ersatz Champion, so there is basically no need to repeat the whole process. And that's why I've decided to put an end to my glorious Purrloin solo run despite the fact that some towns still stand unexplored and that I've not been crowned Champion yet.

I'm quite glad that I could at long last indulge in a feline Pokemon solo run, for such a run has been a dream of mine ever since I discovered the existence of cat-like 'Mons. The only issue is that my Pokemon itch has not been scratched vigorously enough for my taste, which means that I need to play another Pokemon game right away. I'm not too sure yet which version I will elect, but there will definitely be another Pokemon solo run on the heels of my Purrloin one. See you soon for more Pokemon solo action, dear fellow gamers! Thanks for reading, and be my guest anytime!
Posted by Isleif at 13:44