Code:Realize: Please get me out of here 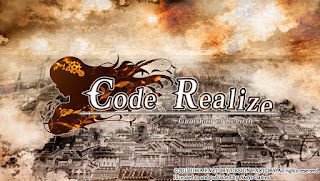 After my glowing experience with Sweet Fuse, I was still pretty low on energy and not quite ready to tackle a demanding RPG, which led me to elect another otome game as Sweet Fuse's follower. The happy winner was Code:Realize, an game that has been patiently waiting for its time since last year. Now that I'm done playing it, I think it could definitely have waited longer.

I'll be blunt: I didn't like Code:Realize. It had its moments and it managed to captivate me to some extent; but overall, it was a pretty negative experience that left a bad taste in my mouth. And yet, as I mentioned above, I played it entirely—and intensively, since I polished off the whole thing in a couple of days without taking a break to write about it. So why was I so hell-bent on playing a game I didn't like, you may ask? Well, I guess it was out of curiosity—morbid curiosity, that is. I wanted to see how ludicrous the story would get and what absurdities it would throw at me; and last but not least, I wanted to see if the game would manage to wrap things up in a fulfilling and convincing way. For the record, the answer was no.

As you probably guessed already, my main beef with the game and bone of contention with its reviewers is the story. It's widely said to be stellar, so much so that the game garnered the stellar score of 85 on Metacritic and was highly praised even by male reviewers; and yet that stellar story failed to enrapture me. This is the Steins;Gate situation all over again: a supposedly amazingly good story that started auspiciously yet ultimately left me cold and annoyed. If you want to know why, follow me through the next SPOILER-bristling paragraphs, dear fellow gamers. 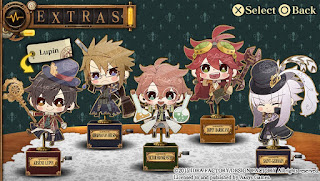 I'll start with a disclaimer: CR's story is not inherently bad, although it has its flaws. It's suspenseful, gripping and well told, with interesting and loveable characters and narrative arcs that converge towards a conclusion that ties all ends together. There are very few contradictions and plotholes, but that's not saying much given the nature of the story: it belongs to the fantastic genre and as such, it's much more likely to get away with plotholes through the shameless inclusion of ad hoc narrative elements. There are a couple of incoherencies, such as the fact that Cardia was virtually abandoned in the middle of nowhere instead of being securely kept at her father's side, or the fact that she could talk despite being an artificial being that had never been in contact with humans before escaping the mansion; but without these, the story would basically not exist. So let's just exercise suspension of disbelief and move forward.

My main issue with CR's story is how sprawling and all over the place it is. See, I am a rather single-minded person that tends to favour slightly claustrophobic "huis clos" narratives, such as locked-room mysteries. I love when writers stick to a simple premise and skilfully work their way around it to weave a gripping and potentially mind-blowing story. And that, dear fellow gamers, is exactly what CR's writers did not do. They do offer an interesting premise, if only a bit cliché; but instead of sticking to it, they expand their narrative to the infinite and beyond, throwing tons of disparate elements that clash vigorously with each other into the mix. Vampires, British monarchy, philosophal stone, cloning, Knights of the Round Table, giant flying fortress: you name them, CR has them. Some developments come completely out of left field and seem to have been included for the sole purpose of avoiding plotholes, filling up narrative threads or giving a backstory to some of the characters—I'm looking at you, Saint-Germain's route. 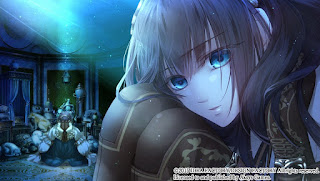 What I dislike even more than sprawling stories is derivative sprawling stories, and CR is a proud exemple of the genre. Not only are the characters lifted straight from literary works, but their backstories and the content of their personal narrative arc are more often than not also lifted from said literary works in the process. Such a heavy-duty borrowing of narrative elements verges on plagiarism—or at the very least on a very blatant and massive lack of inspiration. The blunt thruth is that despite its pizzazz and flashiness, CR is little more than a glorified cross-over fanfiction.

Even worse, CR doesn't even have the grace to be a fulfilling cross-over fanfiction. As anybody who ever laid their eyes on this peculiar form of writing knows, the main purpose of fanfiction is to create romances that were never intended by the original material's creators—the smuttier, the better. Since romance is also the meat and potatoes of otome games, we should have a match made in heaven, right? Well, not quite so. Someone at Otomate apparently decided that it would be a great idea to make most of CR's romances entirely platonic. Yup, you read that right: not even a kiss to reward you for all your hard wooing work, let alone the promise of steamy physical intimacy between the newfound lovers after the credits roll. The harsh truth is that in three of the five routes, Cardia simply cannot touch her lover or be touched by them at all without the protective layers of her poison-resistant clothing. Really, game? Sure, this situation is justified by the narrative, but it sucks nonetheless. What's the point of having a love story in an bloody otome game if it doesn't allow for physical intimacy? That's cruel to the characters, and even crueler to the player that spent several hours of their precious time pursuing a bachelor, only to be rewarded by forced abstinence at the end. Shame on you, Otomate. I feel robbed, I really do. 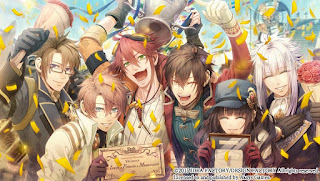 Mind you, there is worse to the routes than the inconclusiveness of their featured love stories. I've come to understand that otome games always have a so-called "true route" that is supposed to fully answer all the questions raised by the story and to put an end to said story for good. Well, CR's writers went absolutely overboard with the true route: they made it the canon route by excellence, grossly neglecting the four other routes in the process. Said four other routes come across as mere side dishes, aborted versions of the main story that the player must plod through to gain access to the only real and authentic route that answers all questions. These routes shift the focus from Cardia's mysterious identity to whatever hurdles her bachelor of choice is facing, leave heaps of questions unanswered and don't even have the decency to offer conclusive love stories, which makes them feel entirely non-legit and out of place in the grand scheme of things. Games like Amnesia: Memories and Sweet Fuse had a true route all right, but all the non-true routes stood on their own and offered satisfying endings. Not so in CR, the game in which all non-true routes are mere roadblocks on the path to the one and only true and cannon route. And boy, does it suck.

My, that was a lot of ranting, wasn't it? You get my point, dear fellow gamers: far from impressing me, CR's story ultimately left me frustrated and disappointed. It certainly doesn't help that it was so darn long: count three to four hours of play for the common route alone, plus two and a half to three hours of play for each route. That's nearly twenty hours of play, and these twenty hours left me drained and exhausted. Mind you, that won't prevent me from writing a route report very soon; I have more things to get out of my chest to settle the score between this game and me. I'll see you soon, dear fellow gamers! Thanks for reading, and be my guest anytime!
Posted by Isleif at 20:48 No comments: 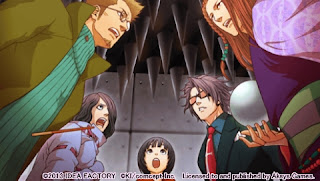 Gee, it's been a while since I last wrote, isn't it? I apologize for the long delay, dear fellow gamers. See, I was pondering which game to play after my last post when I was suddenly forced to take care of urgent matters that invited themselves into my life with the grace and subtlety of a cannonball. I had to use a lot of energy to solve these issues and I didn't lay a finger on any of my gaming devices during the last four weeks. Fortunately, the matter is nearly fully solved as I'm writing; and as the dust is settling and blood is drying on the now quiet battlefield, I can finally indulge in gaming again.

I chose Sweet Fuse because I wanted an easygoing game that required as little player input as possible—I'm still quite low on energy, I must say. Sweet Fuse turned out to be a fun, entertaining little game that packed more punch than I had expected, and I enjoyed every minute of it. The story is gripping—albeit a bit too easy to figure out for my taste—and the romancing process is as simple as it gets: there is no flag system, and the game lets you kindly know when you've made the "right" choice, i.e. the choice that will make the coveted bachelor fall deeper in love with you. This is straighforward and unfussy, just as I like my video game romancing to be. On the other hand, the production values are the lowest of the low: apart from the rather appealing character designs and good voice acting, everything in Sweet Fuse screams "budget". I could probably count on my two hands the number of background pictures used throughout the game and the cutscenes look horrible most of the time. But that's a bit of a law of the genre, I guess; I still have to uncover a VN with stellar production values. 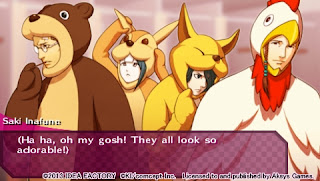 I remember reading reviews deploring the fact that Sweet Fuse was too geared towards a young female audience for males to play it without cringing. I'm quite perplexed by such statements, which I'm tempted to blame on the fact that otome games were virtually unknown in the West when Sweet Fuse was released; because honestly, Sweet Fuse is not that soaked in girliness. Main heroine Saki is far from being a girl's girl, the overall tone is rather grisly and the game packs so little romantism that Amnesia: Memories' rough story feels like an Harlequin scenario compared to Sweet Fuse. Sure, there are a couple of kiss scenes here and there, and they can be cringing at times; but that's mostly because they are very poorly drawn. In a nutshell, don't let the otome nature of Sweet Fuse stop you, for you would miss a deeply entertaining and fast-paced story in the process.

Now's the time to talk about the routes. Here's my own personal ranking, from my least favourite route to my utmost favourite one:


Jeez, I'm quite drained after writing for the first time in a month. Let's wrap this up, shall we? I don't have much to add anyway, apart from the fact that Sweet Fuse is a refreshing otome game that deserves to be played. Oh, and Count Hogstein is hilariously awesome—totally on par with abhorrent Monokuma from Danganronpa. Thanks for reading, and be my guest anytime!
Posted by Isleif at 11:38 5 comments: