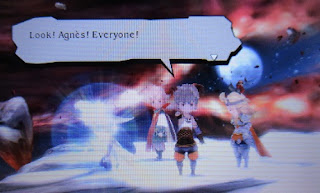 Let's face it: if Bravely Default's gameplay is deeply fulfilling, its story is barely satisfactory. First, it is unnecessarily convoluted and full of superfluous elements. Ringabel being an Alternis Dim from another world who lost his memory in the tranfer? Unneeded, and probably implemented solely to fill the amnesic character/evil twin quota. A version of Agnes from yet another world popping up centuries in the past and being referred to as a angel fallen from the skies? Unneeded as well, and sorely confusing to boot. The story would have functioned just as well without these two elements—and without a ton of others. Secondly, the storytelling is so utterly messy, confusing and clumsy that following the story is more a trudge than a delight. Thirdly, the meta premise of the player being cast as a being from another dimension who enters the body of the main hero to help them save the world is a trifle patronizing. Every RPG player with a bit of experience is fully aware that they are projecting their own self into the main character(s) and don't need to have that notion shoved down their throat by Square Enix—like, "thank you, Captain Obvious". But not all is poorly told and unconvincing: there are also some amazingly good bites in Bravely Default's narrative—starting with the game's alternative ending, which I would qualify as nothing less than an absolute stroke of genius.

Dubbed "Lying Airy", this ending is available from chapter 5 up until the awakening of the ultimate crystal in chapter 8 and must be triggered by disobeying Airy's instructions and shattering a crystal. This is achieved by keeping on pressing the x button after Airy orders you to stop doing so, and this maneuver can technically be performed on any crystal from chapter 5 onwards—although it's highly recommended to wait until chapter 7 or 8, since the time needed to shatter a crystal is directly tied to the strength of your party and thus to their levels. 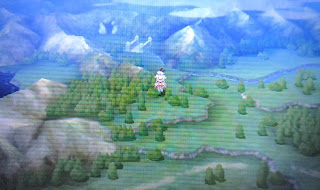 The stroke of genius does not lie in this ending's narrative content, which is hardly worth mentioning, but rather in the process leading to its triggering. "Lying Airy" is not triggered by the obtention of hidden flags or by a dialogue choice like most alternative endings, but rather by a specific gameplay maneuver resulting from a conscious choice made by the player. Shattering a crystal is never presented as a viable alternative by the game; the possibilitity of doing so is only suggested through hints and speculations uttered by the characters. Moreover, shattering a crystal involves disobeying Airy's intructions, and scores of RPGs taught us that we should not disobey guiding creatures that are kind enough to lend us a hand in saving the world. The amount of scepticism and boldness required to cross the Rubicon and disobey Airy is staggering, and yet it feels like a perfectly natural thing to do thanks to the clever way the game brings the matter.

The hint hidden in the title from chapter 6 onwards immediatetly comes to mind: what a brilliant way to hint at the truth, bound to either arouse suspicions or confirm them! Chapter 6 also sees the party mull over the situation and wonder whether waking up the crystals is the right thing to do, whether Airy may have ulterior motives and, most importantly, what would exactly happen if Agnès kept pouring energy into a crystal until it shattered instead of stopping doing so when Airy orders it. After that intense musing, they drop the subject and don't mention it anymore in subsequent chapters. I first deemed this a serious mishap, wondering why the story was not expanding on these suspicions; yet a mishap this is not, but rather a brilliant narrative device. The characters are not drawing conclusions from their abundant suspicions because it's up to the player to do so themselves and act accordingly, in a vertiginous display of free gaming will. 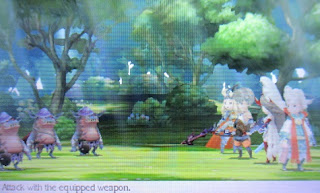 This is a pretty unique setup that I've never encountered in any other RPG, at least not in such an achieved and polished form. A similar arrangement can be found in Link's Awakening, in which the player follows the instructions of a helpful mysterious creature before a bunch of hints arouses suspicions regarding the ultimate goal promoted by said mysterious creature, which may not be as wholesome as it seemed at first sight. The player can then exercise their free will and refuse to follow the creature's instructions in order not to trigger a dramatic outcome. However, that option is not a true choice but rather a defaulting of sorts that's not planned by the game; as such, it doesn't lead to a specific ending, but rather to an eternal statu quo. Bravely Default went much further than Link's Awakening and enriched the mix with a specific gameplay action and a dedicated ending, leading to a much more compelling result.

All in all, this alternative ending is absolutely brilliant, ingenious, clever and whatever synonyms you can think of, so much so that it pretty much single-handedly makes me forget the shortcomings of the narrative. I am utterly grateful to Bravely Default for having treated me to such an original, fresh and thrilling experience, and I can only hope that Bravely Second will have similar delightful surprises in store. Thanks for reading, and be my guest anytime!
Posted by Isleif at 14:09