Back to business, and back to HM! As I'm inching closer to the final showdown, my party has reached its final form and is now pretty much set in stone. And thus it is time, dear fellow gamers, to let you feast your eyes on the Digis that have cruised with me until now and will keep doing so until the credits roll! 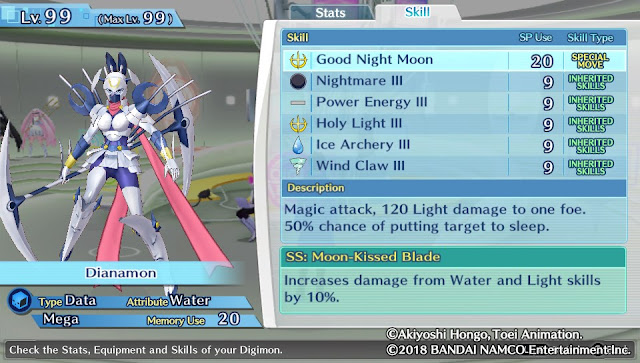 Dianamon: My oldest and most beloved Digi, she's been there pretty much since the beginning. She didn't evolve from my starter, but rather from the second Digi I recruited, an unassuming Renamon. I dutifully stuck to the 'rabbit in the moon' branch of her evolution line: not only did it give me the pleasant feeling that I was dealing with the same creature all along, but that branch's forms are all unbearably gorgeous and stylish — and reminded me nicely of Sailor Moon to boot. Her battle prowess is pretty underwhelming, especially in boss fights where she hits like a baby bunny; but she's been at my side for so long that I simply cannot think of letting go of her, no matter how unefficient her punches are. 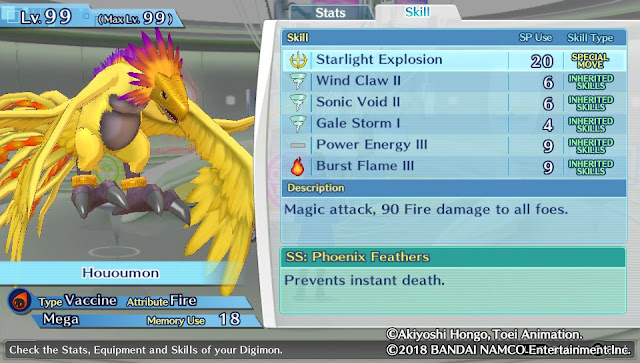 Hououmon: My second oldest Digi, and probably the most active in battle throughout my run. That fiery bird only took a step back in all things fighting lately, after a very long spell where he was my main asset in random encounters as a Garudamon. Not that it changes anything, mind you; like his fellow Dianamon, Hououmon has been part of my team for so long that I'll stick with him until the end, even if he doesn't lift a feather during the final fight. 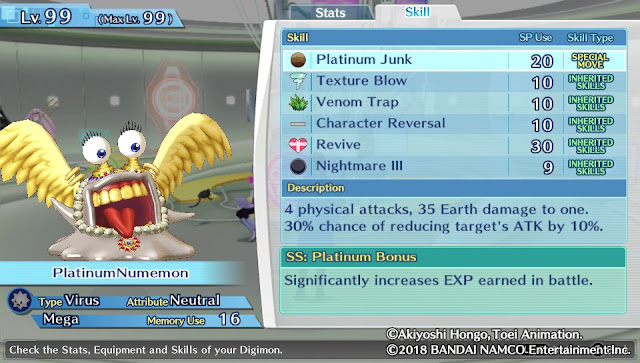 PlatinumNumemon: A.k.a. It's Raining XP. I have three of them, and it's solely thanks to that trio that my whole party is now lounging at lv. 99 — and thanks to fellow gamer Kumiko, who kindly taught me how to obtain those creatures. I didn't expect any sort of battle prowess — or even assistance — from them, but they pleasantly surprised me by: a) Being sturdy as heck with their absurd 999 defense, and b) Wielding all sorts of useful skills, starting with a revival spell. They also learnt Texture Blow, Character Reversal and Venom Trap through their evolutionary trip; and oh boy, did those skills come in handy indeed — especially the latter, which poisons upon hitting. Poisoning in Digimon is the most vicious thing: not only does it last forever, but poison damage is doubled every turn. Needless to say, I copiously resorted to Venom Trap to get rid of bosses with high defense and HP, with a splash of Character Reversal when necessary and a sprinkle of Texture Blow on top when I was in a really sadistic mood. My three gilded piles of poo can now rest in the back until endgame; their work here is done, and well done. 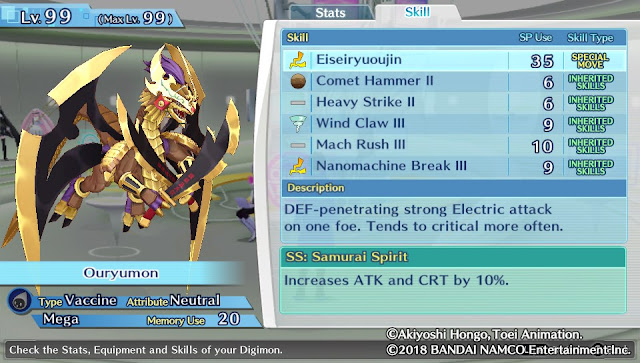 Ouryumon: A.k.a. the Boss Destroyer. That dragon was one of many Digis I raised for experiment and entertainment purposes, and I didn't expect much from him; so imagine my shock when I dragged him from the rearguard to replace a fallen Digi in a boss battle and nuked said boss in two turns with Ouryumon's Special Move! Seriously, Eiseiryuoujin is so utterly broken it's ridiculous. Not only does it land criticals nearly every time, but it's insanely powerful; factor in its wielder's sky-high attack, and you get a real weapon of boss destruction. I swear I took down some HP bags in a matter of turns with that skill, and I wouldn't be surprised if the final showdown turned into a cinch with Ouryumon by my side. 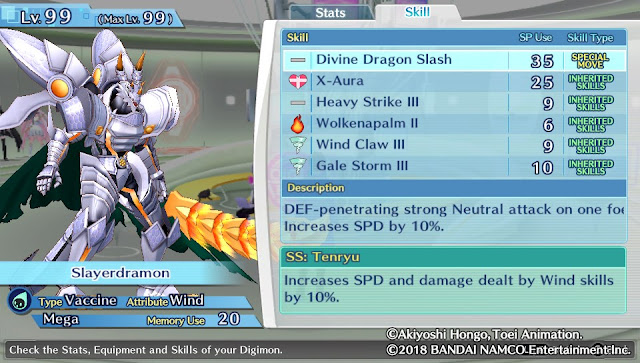 MetalGarurumon (Blk), Sakuyamon and Slayerdramon: A.k.a. the tourists. So far, these three haven't strut their stuff much on the battlefield, with each participation being little more than a cameo. They're good and I can clearly see their potential; alas, there's simply not enough room for everybody to shine in that team. Will they get their moment during the final showdown, only time will tell! 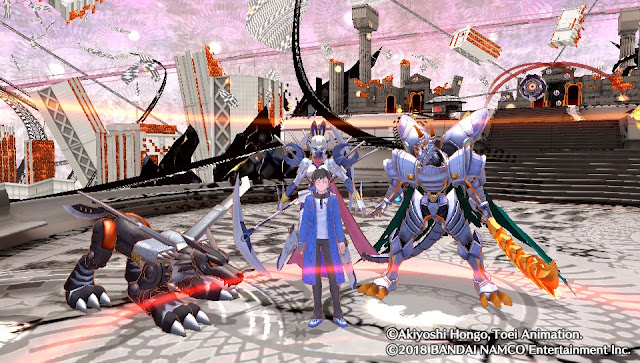 Although my party is kinda crowded, much more numerous are the Digis I discarded as I cruised through the game. I lost count of the number of creatures I recruited and raised, only to Load them mercilessly as their looks and/or battle prowess failed to enthrall me; one of the first victims of that treatment was none other than my starter Betamon, who turned out to be little more than a placeholder keeping the seat warm until better Digis came along. No loyalty, no shame! That constant raising&recycling of Digis is a tad cruel; however, it's also quite entertaining, and it's undoubtledly a key part of the Digimon series' DNA. And with that, dear fellow gamers, my ode to my party comes to an end. My run is about to as well, so I'll see you soon with the obligatory final post about my Digimon epopee. Come on team, now's the final push!
Posted by Isleif at 08:43 No comments: 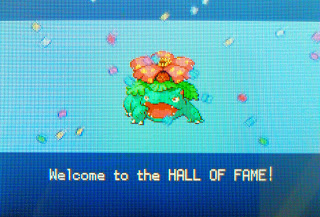 It had to come to this: a solo run with the granddaddy of all Grass Starters, the venerable and immensely popular Bulbasaur. And oh boy, is that immense popularity well deserved. I though Treecko was the best Grass Starter the series had to offer; but it turned out that Bulbasaur is even better, and by a couple of leagues to boot. It's sadly ironic that GameFreak managed to nail the Grass Starter formula perfectly the first time around, only to squander their knowledge in the matter and deliver a host of unbalanced Grass Starters as gens went on. 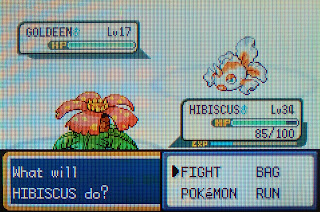 Bulbasaur is the utter embodiment of what I've always thought Grass Starters should be: a late-blooming 'Mon with stellar defensive stats and decent attack stats, who slowly but surely grow into a powerhouse as levels pile up. That process is neatly symbolized by the growth of the giant flower on Bulby's back — a coincidence that's too perfect not to be intentional. My first steps with the grassy creature were definitely tedious: while the early Gym Leaders were a cinch, I was routinely hindered by the most unlikely opponents of them all, namely the Bug Catchers littering Kanto. My Bulby (fittingly renamed Hibiscus) was way too weak to take down those pesky insects in one turn (or even two or three, for that matter), especially with his non-effective Grass Moves and the infuriatingly inaccurate Tackle; as a result, battles dragged on, and only Bulby's natural sturdiness prevented him from being knocked out cold before the end of hostilities. 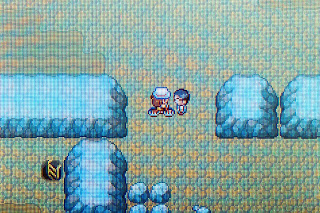 Only after Misty's Water Gym did my little Hibiscus become powerful enough to one-shoot the opposition; and from then on, there was no turning back. The rest of my run was a complete cakewalk, with Gym distribution in my favour and random Trainers quickly and neatly submitting to Hibiscus' indomitable strength. The only true issue I encounter while cruising Kanto was PP depletion, which forced me to backtrack to the nearest town on a regular basis; but since I was fortunate enough to get hold of both Fly and the bike early on, those forced detours hardly hurt. But back to combat: I only struggled ever-so-slightly during the Pokemon League showdown, which forced me to strategize for a change; and after hours spent blazing through Kanto with nary a worthy opponent to hinder me, that change of pace at End Game's doors was most welcome. 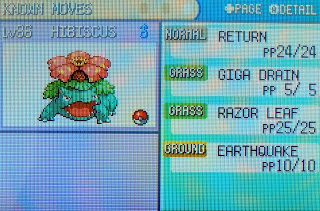 My Move pool was a complete Grass fest: Leech Seed, Vine Whip, Bullet Seed, Giga Drain and Razor Leaf all came to adorn it, and Solar Beam would have too if not for its two-turn nature that makes it totaly unfit for solo endeavours. I was a bit miffed not to be granted an offensive Poison Move that would have taken advantage of Bulby's secondary Type; but with Gen I being Gen I, I cannot even pretend I was surprised by that oversight. I stumbled upon Return by complete happenstance, and was more than delighted to get rid of bloody Tackle; then, I snatched Earthquake in the Viridian City Gym, and slapped it on my Bulby in lieu of the immensely useful but weak Bullet Seed. Better late than never, indeed! Tiny yet eminently efficient, that's how I'd describe Bulbasaur's learnset — especially in Kanto. 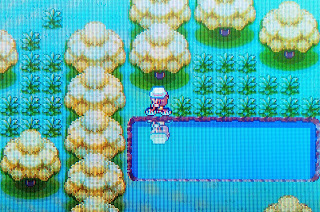 Since I'm mentioning Kanto, that region was even more impossibly grindy than in my memories — which, as you may imagine, totally delighted me and soon put me in the sweetest trance. What had failed to imprint in my memory, on the other hand, was the annoying segment on the south islands. First, I was forced to cross the darn tedious Pokemon Mansion before I was allowed to tackle the Fire Gym; then, before I could Fly back to the mainland and the next Gym as I planned, I was kidnapped by Bill and sent on a unskippable fetch quest while he chilled out with Celio. Was that part always that irritating? I guess it was, although I failed to remember it. Oh, well.

At any rate, I'm now done with the Kanto Starters, and I understand better Bulbasaur's enduring popularity. Not only is his design top-notch and totally cohesive with his slow growth, but said slow growth also perfectly complements Charmander's lightning fast one. I'm now itching to replay the Gen I remakes with Squirtle and see if he falls perfectly in the middle. And with that, dear fellow gamers, the 2019 Pokemon Summer Season comes to an end. New gaming shores await! As for blogging, I'll be cut from internet during the next two weeks, so don't worry if you don't hear a peep from me. Or, to quote one sore loser I vanquished not so long ago: smell ya later!
Posted by Isleif at 11:20 2 comments: