Lo and behold: I'm just done polishing off a Kemco game, dear fellow gamers. Now, why the solemn announcement, you may ask? Well, that's because it's been nearly 30 years since I last played a Kemco game.

My first (sweet) brush with Kemco happened in 1991, when I played — and loved — Bugs Bunny Crazy Castle on the Game Boy. Of course, developers' and publishers' names and resumés were the farthest thing from my young mind at the time; but with hindsight, and a quick glance at Kemco's Wikipedia page, I can claim that I didn't play a single game of theirs after that, be it a game they developed or published. That oversight was bound to end, though, as I stumbled one fine day upon Kemco's Asdivine Hearts on Limited Run Games. The cover's Trails in the Sky-ish art first lured me in, and the heavy retro graphics convinced me to hit the Purchase button; and then there was no turning back. 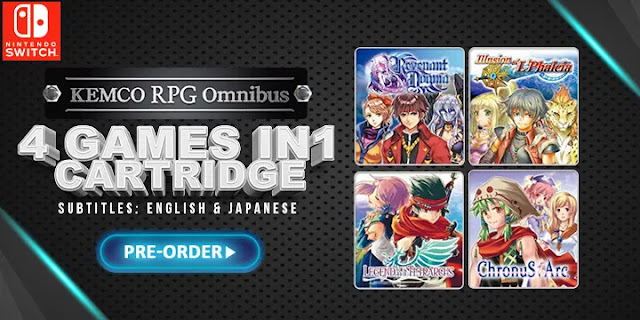 One thing leading to another, it wasn't long before I discovered Kemco's insanely long and thick string of budget RPGs, and tasked myself with the mighty fine mission of purchasing as many of them as I possibly could. That's how I ended up acquiring all the titles released on the Vita, as well as the Omnibus collection for the Switch; however, this is but a beginning, as there's a lot of room for improvement on the Android and Switch fronts. Now, this leaves one question opened: why would I even bother with those games, when I have so many greater RPGs at my fingertips (like, literally)? After all, the general consensus seems to be that Kemco's budget RPGs are little more than mass-produced, RPG Maker-ed pieces of crap that aren't worth any self-respecting gamer's time or money. There's more than a kernel of truth in that statement; and yet, I'll gladly throw money at Kemco and gorge on their budget RPGs. The reason is simple: those games manage to capture the essence of what 16-bit RPGs were about and to deliver it in a fulfilling pint-sized format — or, in other words: sometimes an RPG veteran just wants a simple grindy treat, and Kemco's stuff can scratch that itch like no flashy recent RPG ever could.

Mind you, my passion for all things Kemco RPG was kinda theoretical until recently: although I had tried my hand at many of them to confirm prospective Limited Run purchases, I had yet to finish one of them entirely. I'm just done doing that — yay, me! — and so: see you soon for my first Kemco RPG run report, dear fellow gamers!
Posted by Isleif at 15:32 4 comments: 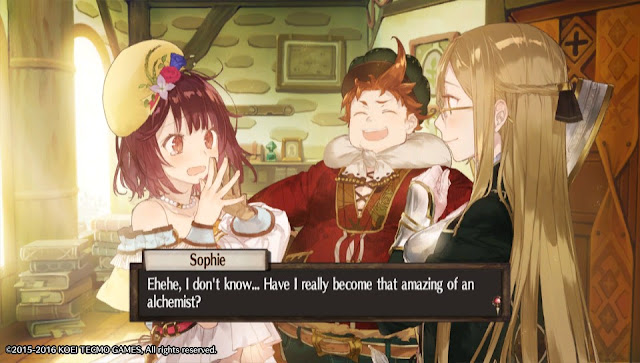 Looks like we have a pattern here, dear fellow gamers. Once again, endgame barged in when I least expected it, leaving me open-mouthed and filling me with wondrous blended feelings of happiness and frustration. Sure enough, there was little left to achieve on the alchemic front when Luard appeared, and he was the only real opponent throughout the whole game; sure enough, the Library of All Creation oozed a Last Dungeon feel, with it encompassing name and powerful mobs; sure enough, I had been playing for more than 50 hours at that point; but pray tell, how was I supposed to know that Luard was the (one and only) Final Boss and that kicking some sense into him would mark the end of the game? He didn't even seem that strong, with his puny 3000 HP; beating him only took two tries — one to test the waters and the real, strategized one — and was no struggle at all. Maybe my playing in Easy Mode and grinding like crazy played a part; but the fact is that I didn't use a single healing item and wrapped up the fight in a mere half-dozen turns. Who said "To vanquish without peril is to triumph without glory"? I think it was Corneille, and he obviously never experienced the delight of blazing unhindered through an Atelier game.


At any rate, this unexpected closure marks the end of my Sophie endeavours for the time being. I had many things left to do, such as uncovering and synthesizing all recipes, fighting with other party members, customizing Plachta and maxing up everybody's affections; however, all that goodness will have to wait until a next playthrough. With my run clocking at a hefty 54 hours, I've had more than my fill of alchemic deeds already. Sophie was a fantastic game, and I enjoyed every minute of it; now I can only hope that Firis will delight and satiate me just as much. And now, dear fellow gamers, let's sail together towards new gaming shores!
Posted by Isleif at 12:13 4 comments:

Well, that took me by surprise. Granted, I had been playing for 25 hours; granted, there were prior narrative hints already; and granted, I had uncovered a hefty 17 dungeons... and yet! The idea that the Sky Tower could be the very last main game dungeon honestly never crossed my mind. I was left gaping at the ending sequence, watching Sakura's and Pika-Cute's goodbyes with stunned and crestfallen eyes; and as the credits rolled, I felt a curious, bittersweet mix of joy and sadness wash over me. It was mission accomplished all right, and I could rightfully be proud of myself; and yet, I was left a bit unsated and vexed about what I saw as a premature ending. 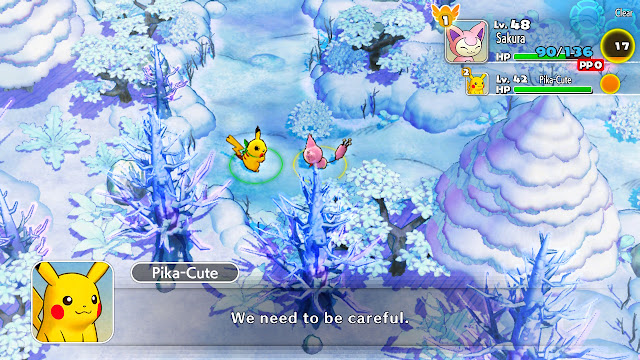 Of course, should I want more crawling, the game would be perfectly happy to humour me. Just like its fellow Mystery Dungeon instalment Shiren the Wanderer, Rescue Team DX offers a middle-sized main game supplemented by a ludicrous mass of postgame dungeons, some of them absurdly enormous. We're talking about a whopping 28 dungeons here — including 6 dungeons with 99 floors — for a grand total of 1209 floors. 1209 floors, people! The mere though of tackling those monstrous afters makes me dizzy and faint — which is exactly why I'll wisely abstain from doing it. That being said, I'm still holding onto my save data, just in case I'm in a intense masochistic crawling mood one day. 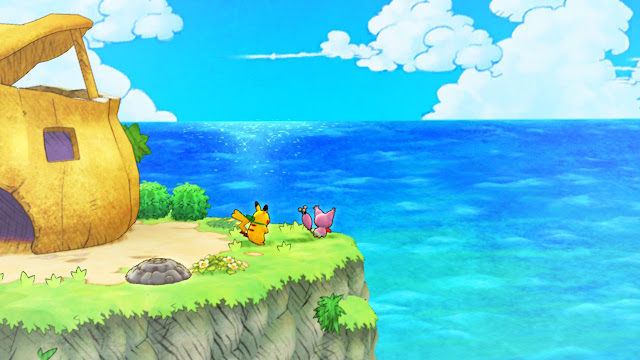 Anyway, those were 25 lovely hours. Granted, RTDX could have been a mite deeper, both in terms of story and gameplay: its humble GBA and DS Phat origins are still very apparent — so much so that it feels a tad too primitive and simplistic for a Switch game. The pacing could also use some tightening and spicing up — although I may have been distrait, it's embarrassing and not too normal that I couldn't smell the last dungeon coming. But playing RTDX made me feel all warm and fuzzy inside nonetheless; and that's all that matters, ain't it? And with that, my revisitation of PMD's first — and last — entry comes to a satisfying end; a happy end, even, considering that it virtually erased my underwhelming experience with Blue Rescue Team. And now, off to new gaming pastures!
Posted by Isleif at 21:46 No comments:


After a couple of hours of farming and grinding and crawling and stockpiling, I'm finally prepared to tackle that accursed Sky Tower. Not only is my inventory full to the brim with all sorts of crawling necessities, but I prepped up my team for a long and potentially arduous crawling session. A picture is worth a thousand word, so see for yourself the extent of my preparations below: 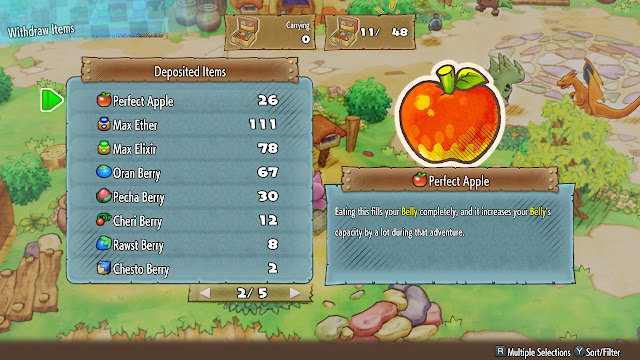 There are five pages like this. Not bad, knowing that my storage was desperately empty a couple of hours ago. And after reaching the Platinum level, I have 48 slots in my crawling bag ready for the filling. 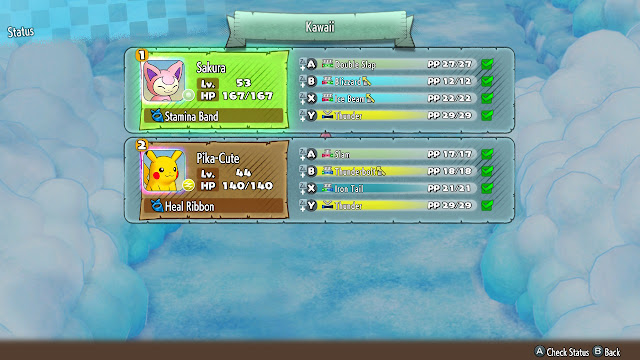 Those levels should suffice to tackle the Sky Tower without biting the dust. The Stamina Band, which considerably reduces Sakura's belly depletion speed, will allow me to crawl without having to worry about my Apple supplies; and the Heal Ribbon will protect my weaker Pika-Cute from fainting too readily.


And so, to the Sky Tower we go! I'll see you soon with a fresh crawling report, dear fellow gamers. Take care, and keep up with the good gaming!
Posted by Isleif at 16:15 2 comments: 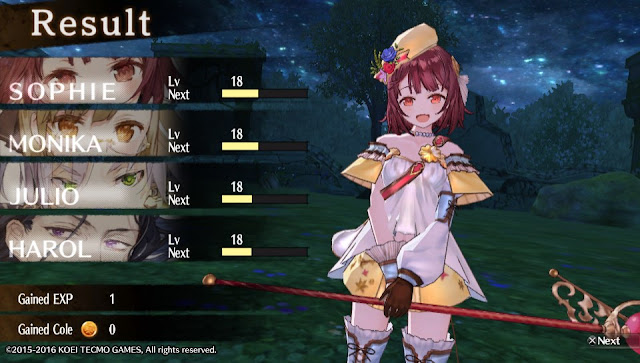 48 hours of Atelier Sophie, folks! How did it come to this? If you ask my inner gaming clock, I've been playing for hardly 10 hours, not close to 50. I love that game indeed, oooh yes precious. I've come a long way since my last post, as shown by the following list of accomplishments:

— I reached the lv.20 level cap and entered the Ability Point regimen. All characters benefited from it and were automatically promoted to lv. 20, even those who never put a toe on the battlefield such as Cory or Fritz. I upgraded my crew's most spammed used Skills and raised their Stats, but there's still a lot of potential for growth.

— I enhanced my crew's gear to the max after grinding tons of Rainbow Crystals in the Forgotten Nursery. Thanks to all that toiling, I could finally beat not only that darn giant fish at Prospector's Strand, but also a Puny boss and a pair of dragons. 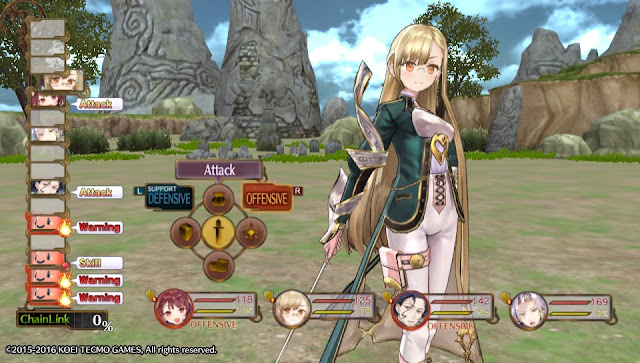 — I synthesized a Fairy Cauldron with complete Rotation, a 5x5 grid and a lv.2 Bonus Display. This was a major alchemic victory for nooby little me, and it significantly increased my mastery of Synthesis. For instance, I noticed that the order in which I put pieces matters: if I want to increase a certain Trait, I should put the pieces that correspond to it last, when the Effect Values of Panels have been maxed up by the addition of other pieces.

— I uncovered the last of the Hope Recipes, although I still have to synthesize it. There are still 9 recipes missing in that Hope batch, but I'm not losing sleep over it as long as I can still progress unhindered. 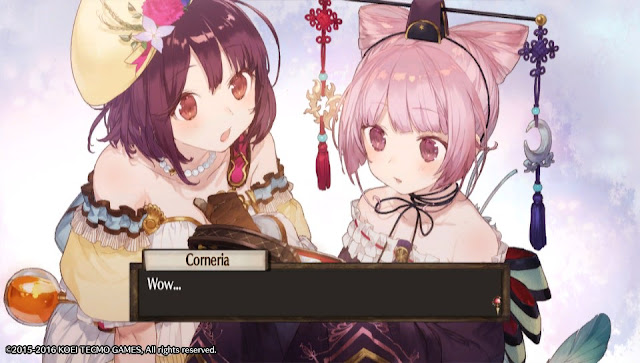 — I unlocked the Dream and Mystery Recipes. Not only that, but the last of the Dream Recipes is ready for the synthethizing and just waiting for my Alchemy Level to be raised. Unless I decide to ignore the level suggestions entirely, as I did a couple of times already.

With all that done and dusted, the only thing left to do is to keep foraging, fighting and synthesizing till I see the credits roll — or fold under grinding fatigue. We're not there yet; so for now, back to the cauldron indeed!
Posted by Isleif at 16:55 No comments: