I didn't choose that title solely because RemiLore is a Hack and Slash in which you collect candies, but also to convey that it stands halfway between hardcore and casual. As such, it's bound to ruffle pretty much everyone's feathers at first — including mine. Here are a couple of things you may want to know about that game before you commit yourself to a purchase: 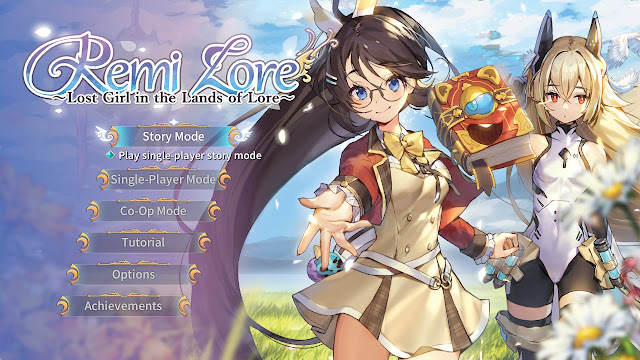 — It's much harder than you'd think. RemiLore may be hardly longer and deeper than your average phone game, but that doesn't mean it's a cakewalk. Mashing the A button won't do the trick and carry you through the game; this is no mere Action-RPG, but a true blue Hack and Slash, which implies subtler fighting physics and a higher level of technicality. Mastering the flow of battle through sheer exposure is crucial to progress, as each weapon and each foe has its own fighting rhythm and style.

— It's a Die and Retry thing. Not in a platformy sort of way, though: since levels are randomly generated, you won't have to learn every single enemy placement à la Ghosts' n Goblins to make it through RemiLore. Instead, it's an iterative process: you gain better weapons and abilities as you forge ahead, which allows you to progress a bit further each time, until you finally make it to the credits. 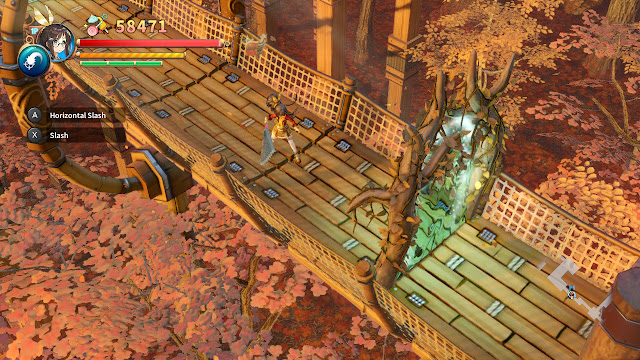 — It's utterly shallow. Not only can you forget right away about any sort of RPG mechanic involving levels, skills or customization, but you must also renounce any sort of evolution in the core gameplay. Punching things into oblivion is this game's sole reason to live, and that's what you'll be doing from the title screen to the credits. The story is so utterly futile that you're given the option to play the whole thing without cutscenes, right from the first run. If you don't like that maniacal focus on all things fighting, you'd better give RemiLore a very wide berth.

— It's both cruel and forgiving. RemiLore slaps you with one hand and strokes you with the other, in the blindest and most befuzzling — or infuriating — way.  You die and die and die again, with no save point whatsoever to preserve your hard-earned progress through levels; yet you get to keep your weapon, your upgrades and most of your hard-earned Candy. You sometimes get a handful of healing potions at once, or a bunch of amazing weapons; yet you cannot store any of them for future use. You get blessed with the sweetest upgrades, and cursed with the meanest downgrades the minute after. 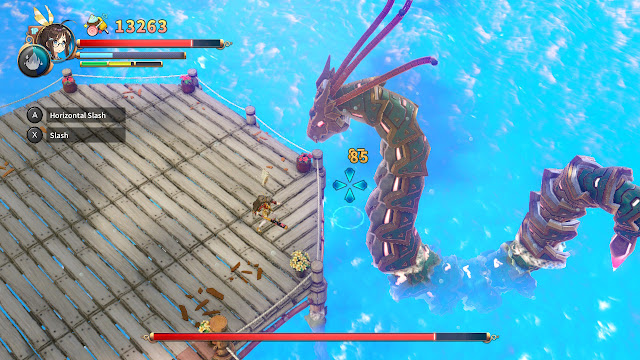 — The fighting system is awesome. Not only is there a lovely physicality to all thing punching, with neat hitboxes, automatic aiming in melee and just the right density and elasticity from foes, but you can really punch it your way thanks to all the weapons and upgrades available. Want to be all about combos? You can! Want to use magic and hardly lift a finger? You can too! Well, if you get the right upgrade, that is. Which can be tricky sometimes. But still, the possibility is there! Cherry on the cake, you can destroy furniture for extra fun and Candies. It's so darn addictive that I just cannot leave a room before every single movable smashable lies in tatters. 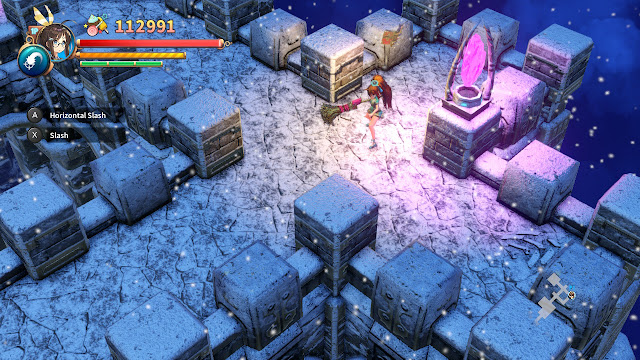 In a nutshell: RemiLore is a cute Hack and Slash with excellent physics yet shallow gameplay. I'm not too sure there is actually a wide audience for that kind of thing — or even an audience at all, for that matter: hardcore Hack and Slash aficionados may sniff at the game's lack of depth and challenge, while casual players may be put off by its unexpected difficulty spikes. Heck, even I cannot swear I'll manage to finish it: I went in expecting a light-hearted, easy-peasy ride, and kinda got more than I bargained for. Oh well, we'll see!
Posted by Isleif at 20:00 No comments:


I'll admit it: I bought that game solely to get that lovely fluffy Gigantamax Eevee in Sword&Shield. I certainly didn't expect to enjoy it one bit — let alone to absolutely adore it. That game blew away all my negative preconceptions in the sweetest way, and I'm more than happy to eat humble pie. Also: from now on, I vow to never again take part in heated internet debates about yet unreleased games, be said debates positive or negative. 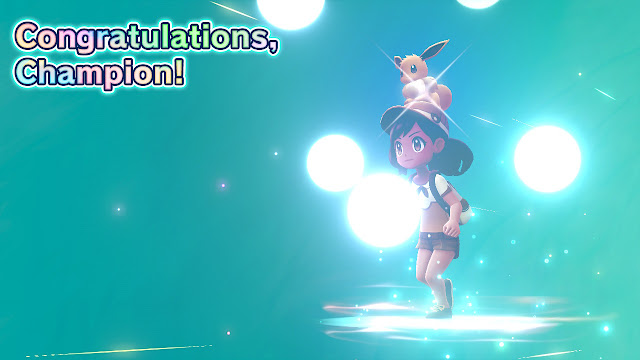 Unlike Yellow, which didn't allow Pikachu to shine as a starter, LGE is the perfect vehicle for Eevee. In true Yellow fashion, that brand-new starter version of Eevee cannot evolve; but that small annoyance is more than compensated by the existence of eight amazing Partner Moves with a BP of 90 — one for each of the types Eevee can evolve into. Not only that, but Eevee's stats were boosted especially for LGE, with a base stat total of 435 instead of 325. All in all, Partner Eevee so is ridiculously overpowered that I really wonder why Let's Go Pikachu is the most popular half of the pair. Of course, I'm being purely rhetorical here, because I know why just as well as the next Pokefan; but gosh, players should really give Let's Go Eevee a try and revel in the sheer badassness of little Eevee. Cherry on the cake, Partner Eevee is absurdly adorable, with its cute little cries and lovely fur a shade lighter than regular Eevee's. 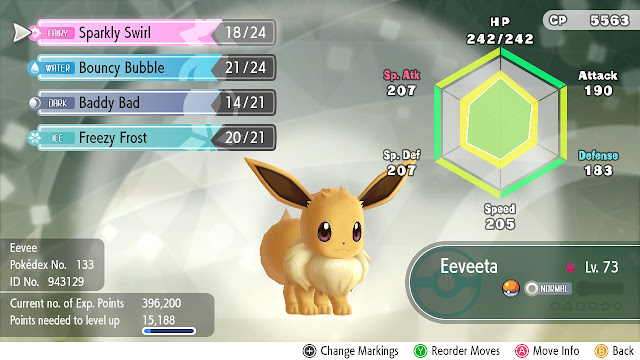 Of course, I cannot help but mention 'Mon catching — i.e. the feature that revolted me before the game's release — and eat yet another giant slice of that humble pie by admitting that it's much, much funnier than I expected it to be. After fumbling in the early stages, I found my catching groove and was soon trapped in the most delicious grinding and farming trance, sending my freshest catch to Professor Oak and reaping Candies like it was going out of fashion. I swear, my little Eeveeta gobbled so much Candies that she was probably diabetic by the end of my run! I really dig the clarity of that new system, which I'd dub 'EV Training for Pokénoobs'. I routinely manage to max up my One and Onlies' EV in my runs; however, I always do so in the blindest way, just punching every creature that crosses my path into oblivion. This time around, I was able to see exactly which Mons were tied to which stats through the obtention of Candies; and I shamelessly used that knowledge to patch up Eeveeta's weaknesses during the early stages. 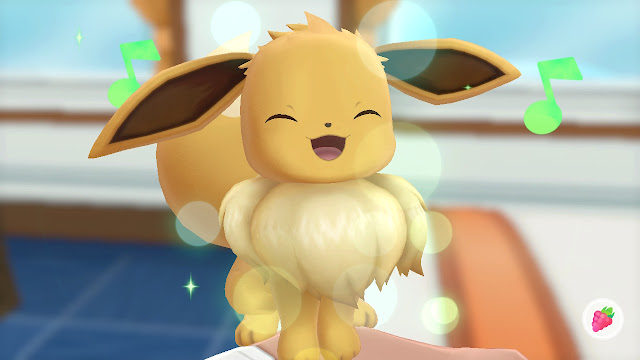 This was a perfectly wholesome game, full of lovely details and moments — from Pokemon private jokes for the faithful to Eevee itself, which is the cutest and dinkiest thing this side of Skitty. LGE offers the best quality of life improvements while still boasting a very retro, 8-bit quality that I totally didn't expect to find. I got flashbacks of my Game Boy days all through my run, which was the most wondrous and unexpected thing ever — heck, even the GBA remakes didn't make me feel that way! I really got that sweet, vibrant feeling of discovery, which was part and parcel of my first videogaming experiences yet got fainter and fainter over the years. As far as I was concerned, Gen VIII Kanto might as well be a new region — because that's how roaming it made me feel. 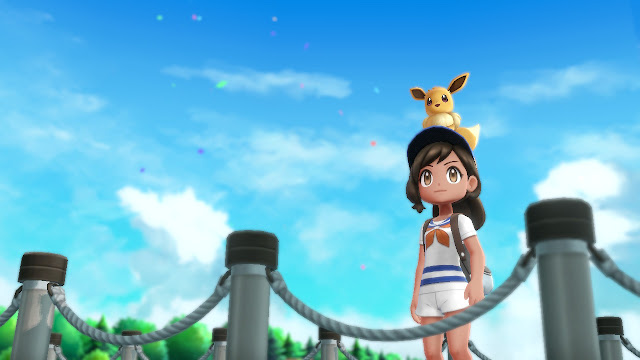 For the first time in years, I kinda didn't want my run to end when I was inducted into the Hall of Fame. Yup: I love that game indeed, more than I ever though I would — which begs the logical question: should I also buy Let's go Pikachu? Somehow, I don't really want to — more like really don't want to. Not only do I prefer the Let's Go Eevee version exclusives, but I don't even need a second copy for trading purposes given that breeding is absent from Let's Go. Also, I don't quite fancy Pikachu enough to want to cruise with him yet again in Kanto. Let's just stick to little Eevee, shall we? (Edit: I finally bought Let's Go Pikachu.) See you soon for more Let's Go goodness, dear fellow gamers!
Posted by Isleif at 15:48 4 comments:


I got my precious Switch Lite a mere one and a half month ago, and I've bought waaay too many games for it already. But no matter how liberal I am when it comes to gaming purchases, I still maintain a strict policy of NOT purchasing Switch ports and remakes of games I already own on other handhelds. This means that Switch titles such as Fate Extella Link, Disgaea 1 Complete or The Lost Child are, no matter how tempting they may be to yours truly, a total no-buy. However, every rule needs an exception; and in that case, the (most welcome) exception is none other than Pokemon Mystery Dungeon: Rescue Team DX, a remake of a game I first played and wrote about a good six years ago. 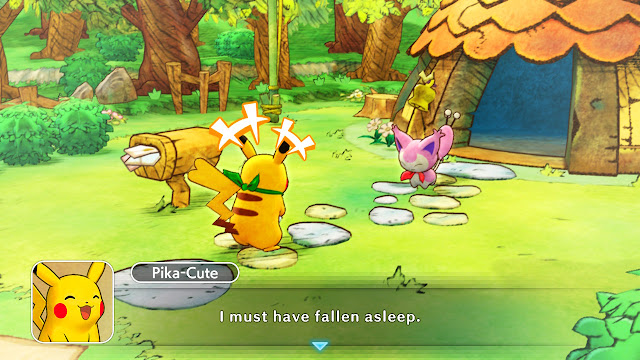 Back in the days, I spared no words to illustrate my dislike of the original. At the time, I was mostly disturbed by the primitive graphics and the random dungeon design; however, I quickly learnt to accept the former as an essential element of the Pokemon series' DNA, and the latter as part and parcel of the Roguelike genre. After playing and loving Explorers of Sky and Gates to Infinity, I gave Blue Rescue Team another chance; unfortunately, I was totally put off by the slow and clunky gameplay, and decided to part with the game for good. As I exited the pawn shop, I was utterly convinced I would never, ever play that game again; and I couldn't help but feel a mite sad over not liking the original instalment of one of my favourite Roguelite series out there. 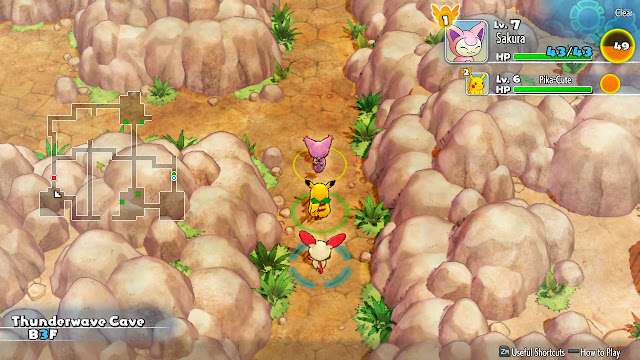 But lo and behold, Rescue Team DX is coming; and it's giving me the delicious and most unexpected opportunity to get over my hard feelings towards Blue Rescue Team. That remake literally solves all my issues with the original game: it offers prettier graphics (the coloured pencil effect is the most adorably regressive eye-candy I've seen this side of Yoshi's Island) and dungeons that look more naturalistic, along with much snappier and smoother gameplay. Not only that, but it even solves issues I didn't have, such as not being able to choose my main 'Mon! Of course, I chose Skitty as said main 'Mon, with Pikachu as my comrade-in-arms. The demo was short and sweet, and delightful all around: the remake nicely — and wisely — retains the swiftness of the original, with only the minimal amount of cutscenes and lightning fast immersion into all things roaming & crawling. I harbour very warm feelings towards Rescue Team DX already, and I'm preciously keeping my save data safe until it get to play the real thing. 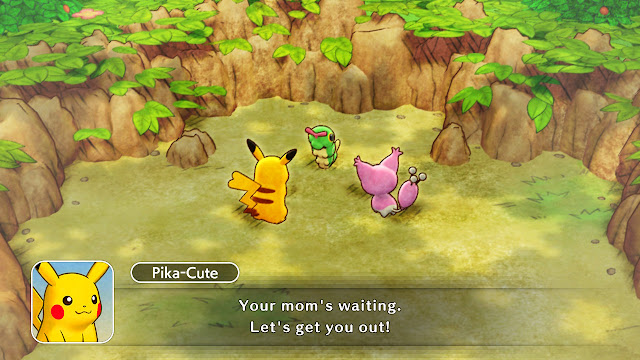 All in all, I can't help but marvel at the twists and turns of gaming fate: never in a million years did I think I could finally play and enjoy that game, so many years after playing it and ranting writing about it for the first time! I'm hyped up for Rescue Team DX and waiting impatiently for the 6th of march; and I'm seriously hoping that this unexpected remake will pave the way for more PMD entries on the Switch. Lovely Pokemon and crawling days ahead!
Posted by Isleif at 12:36 6 comments:


Gosh, Nintendo can be so frustrating sometimes. I'm pretty patient and tolerant; but even I can't help being annoyed when the Switch connection to Facebook is down for more than a full week, preventing me from exporting pictures of my latest runs and putting the finishing touches to my posts about said latest runs. This system was already tedious enough, but that was the last straw. I thus caved in and purchased an SD card, along with a PC adapter. No more transfer hassle, hooray! Until these preciouses arrive, I'm gonna shelve my already written posts. I'll hopefully see you soon, dear fellow gamers!
Posted by Isleif at 13:13 2 comments: