So here’s the story, dear fellow gamers: after getting the latest Pokemon pair as a (most fitting) birthday present from my sister, I immediately proceeded to dive into the updated charms of Gen IV. For that first trip through shiny revamped Sinnoh, I picked Chimchar, a Starter I had yet to run solo with. However, I quickly developed mixed feelings about that choice: not only did I kinda dislike Chimchar’s new sprite, but I also couldn’t shake off the thought that it would be more interesting and scientifically accurate to cruise with the fire ape in Platinum. I was still mulling over the whole situation when I reached Floaroma Town and innocently talked to that nice gentleman standing next to the town’s entrance; and lo and behold, said gentleman rewarded my socializing efforts by offering me a Jirachi. 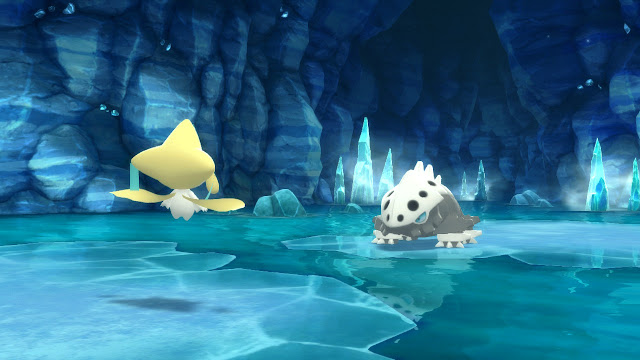 I didn’t know yet that having a Sw&Sh save file on your Switch was the key to obtaining that Jirachi, and I was left gaping at the screen in sheer disbelief; but as I recovered, the face of my run was changed forever. Pray tell, when would I get again such a golden chance to run with a friggin’ Legendary ‘Mon? Maybe never, that’s when! (Turns out that BD&SP actually offer not just one, but two other such chances; but that’s a story for another time.) And so, I instantly proceeded to dump my Chimchar into the next Pokemon box and to hit the road with my lovely Citrine. 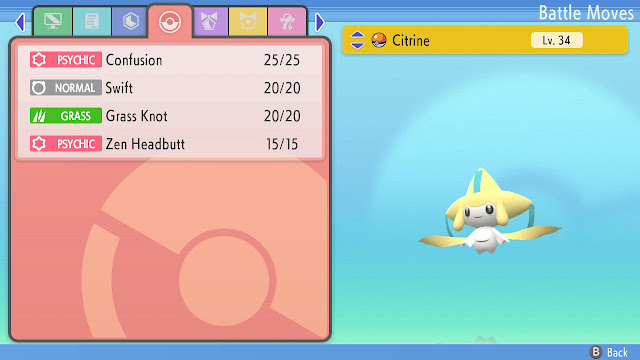 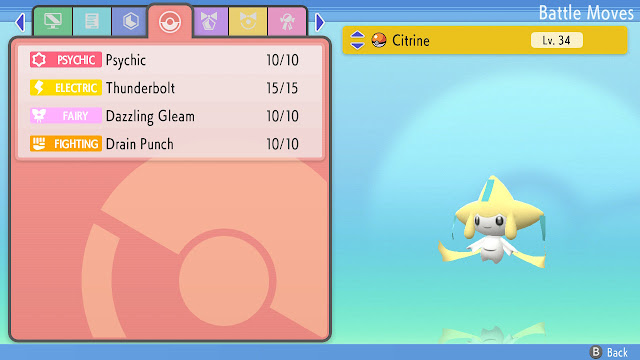 Legendaries have stellar Stats as a rule, so no need to expand on that; let’s just say that one-shooting was our bread and butter from beginning to end — or nearly so; but more on that soon. I usually love double Typing, and Citrine’s Steel/Psychic Type didn’t disappoint — nine resistances, one immunity and no double weakness, baby! As for Moves, I used two main pools, which you can see above. The interesting thing is that Citrine only reached Lv.70 at the end of my run; and so, I missed entirely on the three last Moves in her arsenal, namely Double Edge (learnt at Lv.77), Last Resort (learnt at Lv.91) and Doom Desire (learnt at Lv.98). Doom Desire wouldn’t have been a great fit for a solo setting; but boy, would I have loved to wield the other two! 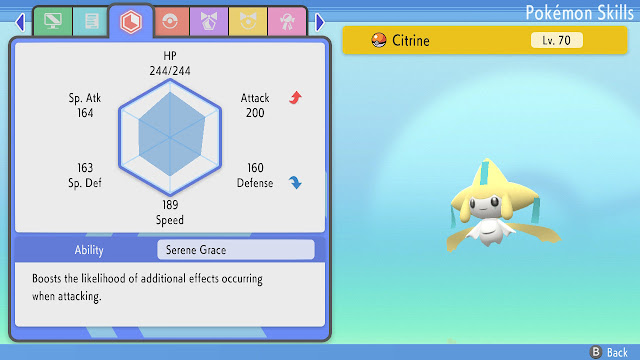 In fact, I would have loved to reach Level 90-or-so overall before the final showdown, interesting Moves or not. The BD&SP Elite Four features ‘Mons with levels ranging from 55 to 66, holding all sorts of annoying Items; and, well… My Lv.70 Citrine struggled. Not overly so, but enough to force me to use a couple of Battle Items for the first time in my run. That somewhat anticlimactic ending dampened my spirits ; combined with the missing Moves thing, it nearly makes me want to tackle a Jirachi run redux. The question is, can I get another Jirachi? It should be possible, especially considering that I own two Switches; but that's a bridge I'll cross if/when I get to it. 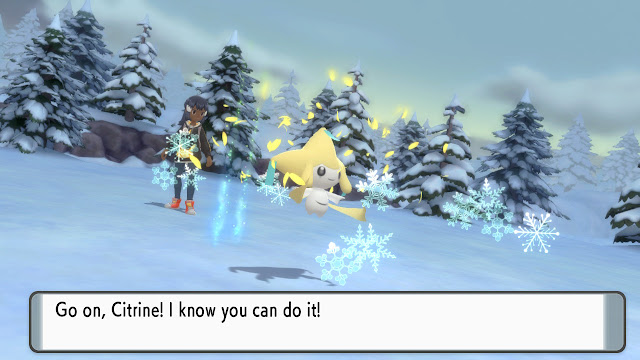 Anyway, did that run change the way I view Legendaries? Ooooh yes, it sure did. I used to mourn the fact that these ‘Mons were forever out of my reach, and fantasize about their utter awesomeness; but I don’t anymore. Not only was I finally blessed with a Legendary Solo Run, but I also realised that these ‘Mons, as stellar as they are, are not invincible. They have their weaknesses like any other ‘Mons; and I’ve cruised with a number of regular ‘Mons that perform as honourably as Jirachi in a solo setting — think Absol, Tyranitar, Zangoose or Charizard. Now don’t get me wrong: that was an awesome run still — much smoother and easier than the one that followed it. I’ll see you soon with the report for that run, dear fellow gamers; until then, keep gaming and take care! 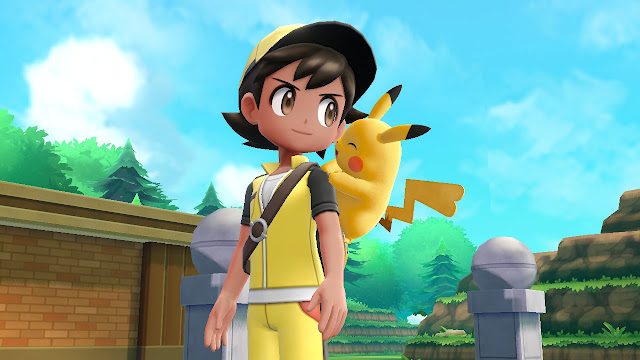 Hullo, dear fellow gamers! Let’s not pretend to be surprised that I finally purchased Let’s Go Pikachu after swearing blind that I would stick to Let’s Go Eevee and move on straight to the run report, shall we? I needed something sweet, cute and comforting after polishing off Dragon Sinker, and LGP filled the bill perfectly. 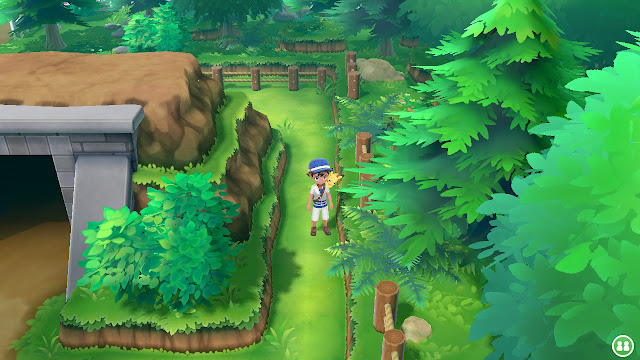 My cute Spark of Joy was the most adorable female Pikachu you could imagine; and fill my heart with joy did she indeed. Her utter loveliness made me forgive her lacklustre prowess on the battlefield, as well as her shallow learnset; however, it wasn’t enough to make me forget them entirely. Every time I took damage because I failed to one-shoot something, I was reminded that Pikachu have always been, is and will forever be crappy solo run material. Having said that, Partner Pikachu is still the best version of all available Pikachus — i.e. regular Pikachu, Alolan Pikachu and Starter Pikachu. For one, it gets a lovely stat boost, similar to the one granted to Partner Eevee. My Spark of Joy’s Modest Nature made her the perfect mixed attacker, which in turn allowed her to make the most of these three exclusive Let’s Go Moves other Pikachus could only dream off. We have Zippy Zap, an 80 power Physical Move, Splishy Splash, a 90 power Special Move with a 30% chance of paralysing, and Floaty Fall, a 90 power Physical Move with a 30% flinch chance. I completed that awesome trio with Brick Break, and got what is arguably the best Pikachu Move pool ever. 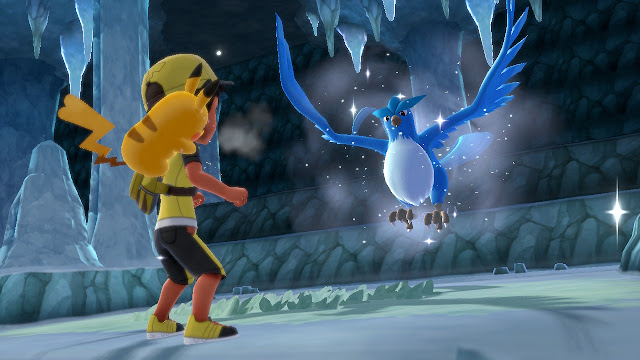 Brick Break, a Move Pikachu didn't wield in Yellow, was obviously an ace in the hole. It make short work of Pikachu’s main kantonian foe, namely Giovanni, and generally saved me from trembling with fear at the sight of a Geodude or an Onix. Spark of Joy was much better equipped to handle Kanto’s challenges than her Yellow counterpart, from Brock’s Gym to the Champion himself. 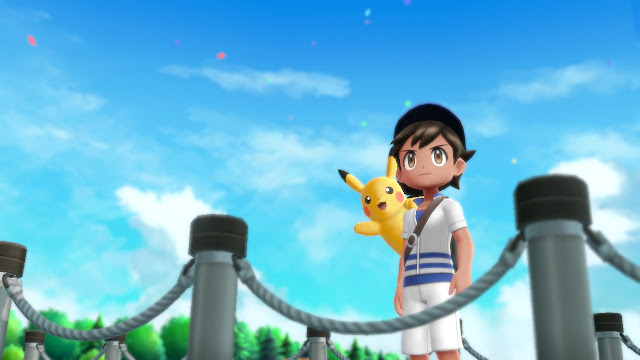 I don’t have much to add, really. It was a lovely run, and it gave me what I needed, namely easy grinding and pleasant feelings. I don’t regret purchasing that game after all; although I definitely prefer Partner Eevee, I may well want to cruise again with Partner Pikachu one of these days. I’ll see you soon with a bit of extra Pokemon goodness, dear fellow gamers; until then, keep playing and take care!

Hello and Happy New Year, dear fellow gamers! I wish us all the best for 2022, in gaming as well as in other areas! ^^

2022 means a lot to me, and not only because it’s already shaping up to be much better than 2021. For one, it marks the 10th anniversary of my Second Coming of Gaming, which unfolded over 2012 as I had just turned 30. For another, as you guessed already, it marks my entry into the glorious 40s — hooray! I made it there!

And boy, am I glad to leave my 30s behind. They were an incredibly fast-paced and rocky decade, full of tremendous delights and heart-wrenching sorrows. The highs were very high, the lows were very low, and each year brought more changes and plot twists than I could handle — which is probably why my mind folded at the end of those ten chaotic years. What I want for the next ten years is kindness, appeasement, and generally enjoying life at my own pace. And last but not least, I want to play games.

Yes indeed; my passion for gaming is still burning as bright as ever. I realised over the course of bitchy 2021 how important gaming is to me; it fills a niche that nothing else in my life occupies, halfway between meditation, escapism and endless provider of reward feelings. And lo and behold, gaming was even at the centre of a turnaround point in my recent recovery process. I was in bed playing a game I’ll write about soon; and as I played, I felt a sweet mental tingling, a hunger for more, that I hadn’t felt for a long time. That game was my beacon of joy for the following days, and it opened the door for more feelings of excitement and anticipation over other things.

Long story short: I wanna play games in 2022, and probably beyond. But for now, let’s focus on the former, and end the suspense: not only is the New Classics phase definitely going to be a thing, but it has started already! I wasn’t even meaning to, mind you: I found myself playing a game my gaming instinct vehemently demanded, and loving it to pieces… Before said gaming instinct decided it was enough for now and claimed another game after a mere two hours of play. I think those last two years of not playing much are finally catching up to me, and my gaming instinct is coming back with a vengeance — and an unquenchable thirst for new gaming horizons.

So, here’s the plan for the next weeks: first, I’ll write and post the reports for the runs I finished recently; and then, I’ll move on to the New Classics reports. I’ll tackle games in no particular order, just following my ever-dependable gaming instinct. Boy, I have an inkling this gaming year is gonna be fun indeed. Until next time, dear fellow gamers, keep doing your thing, and take care!