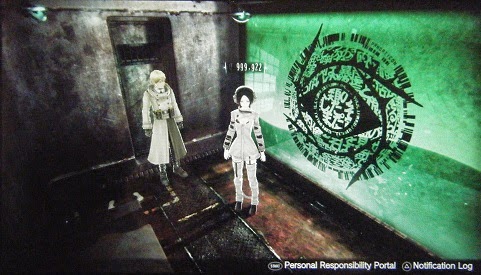 As much as it pains me, I won't be able to play Freedom Wars any time soon. Or ever, for that matter.

The reason is quite simple: this game makes me sick. Like, physically sick.

Believe it or not, Freedom Wars is the first 3D game I've ever played in my entire gaming life. When saying "3D game", I do not refer to the 3ds type of 3D and the games that accommodate it, but rather to games that let you move in every direction on the X, Y and Z axes and rotate the camera at will. I've seen people play such games, but I never did so myself, for I always felt strangely reluctant to try my hand at this type of gameplay. And maybe there was a very good reason for that, after all, since it turned out that I literally cannot stomach the visualization.

To put it simply, Freedom Wars gave me motion sickness—or simulator sickness, as it is called when applied to video games. The handful of gameplay sessions that I went through gave me terrible headaches, along with nausea and alarming signals that my lunch could go through rejection. I gave up on playing rapidly and researched the matter a little bit, and it turned out that I'm not the only one suffering from that rather modern gaming issue. Some people suggested playing the incriminated games over and over in short sessions to overcome the problem, but the thought of enduring headaches and nausea until I hypothetically manage to get used to the 3D visualization was more than I could bear, so I decided to give up entirely on Freedom Wars instead.

It certainly doesn't help that I never felt attracted to 3D games in the first place. I've always found such games confusing and messy, and the need to rotate the camera really rubs me the wrong way. Call me lazy if you wish, but I really think that this kind of petty tasks should be handled by the game in order to let me, the player, indulge in more interesting things. I'm perfectly happy with a camera that focuses on my sprite and follows it at all times while I'm slashing my way around and exploring areas shown from pre-determined and fixed angles. Heck, I'm more than happy with it: that is the sole way I want my games to be—all the more so as it is now proven that I cannot tolerate full-blown 3D games. Jeez, if the whole gaming industry goes HD and 3D in the next decade, I might become a full-time retro gamer much earlier than I expected. Oh, well.

At any rate, I will not play Freedom Wars, nor will I purchase any other 3D game from now on. As for the couple of other 3D games that I own, I will give them a brief try and see if I can tolerate them—although I don't have much hope: even though they made me less sick, there would still be the camera issue to irritate me. But time only will tell.

Since I had such lofty expectations regarding Freedom Wars, I was quite crestfallen by this turn of events. Compensation was definitely needed; and since I was really in the mood to lavish attention on my Vita, I started playing Sorcery Saga. I was instantly hooked, and my disappointment was forgotten. It's sweet to have a massive game library, indeed.

Now that the Christmas rush is over, I can get back to my normal writing schedule with much joy and relief. I apologize for the delay and thank you profusely for your patience. Thanks for reading, and be my guest anytime!
Posted by Isleif at 12:06 2 comments:

Email ThisBlogThis!Share to TwitterShare to FacebookShare to Pinterest
Labels: Vita

Hello there! I've been absent lately, but this blog is not forsaken, perish the thought. My line of work is at its busiest in December, and despite my best efforts, I couldn't find a second to play games these last two weeks, let alone write about them. However, I have a couple of articles in the pipeline and should be able to work on them in the weeks to come, as well as a handful of delighful new games that I'm planning to play in early 2015. In the meantime, thanks for your patience, and be my guest anytime!
Posted by Isleif at 12:12 2 comments: