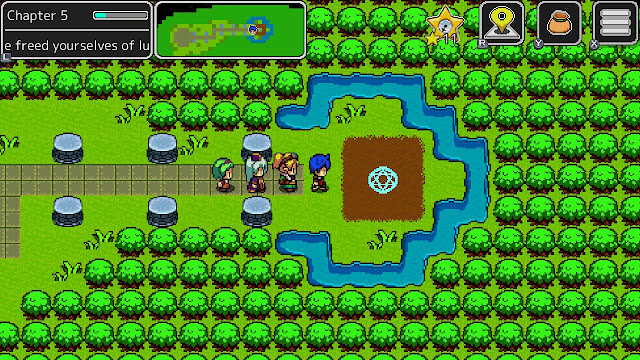 Sometimes, an RPG veteran just craves a quick and easy treat; something that can be polished off in a single evening, while still delivering a healthy dose of grinding and a sense of accomplishment at the end of the run. And lo and behold, the two Kemco offerings mentioned above provide exactly that. 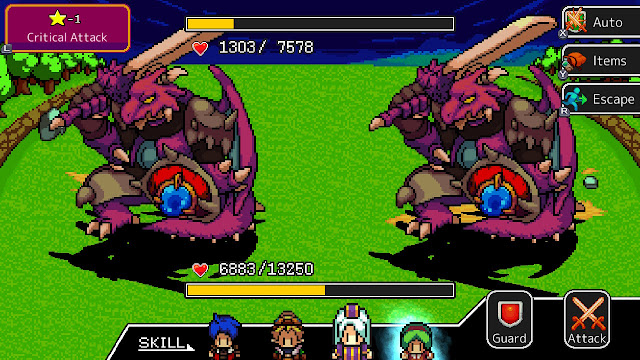 I’m lumping these two games under the same post, because they boast the exact same structure, only with different sprites, skills and story. That structure goes as such:

—      An average playtime of 3 hours for full completion, i.e. reaching Lv. 99 and beating the final boss.

—      Five chapters with a progression bar, and automatic save after each random fight and menu opening.

—      First-person turn-based combat à la Dragon Quest, with a common HP and stat pool for all allies and another for all foes.

—      A boss rush at chapter 5, complete with mandatory grinding before the final boss.

—      No postgame or side quests whatsoever, but the possibility to start a New Game + with your level and money from the previous run. 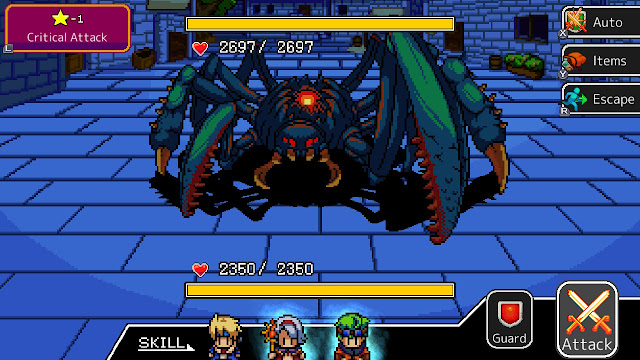 And that’s the gist of it. Somehow, these two games manage to tick all classic RPG boxes under three hours, and that’s quite a feat; cherry on the cake, they boast lovely nostalgia-inducing 8-bit-ish graphics and theme tracks, and they offer simple yet engaging stories. Combat is neatly balanced, and each title sports its own unique party dynamic, which leads to game-specific strategies. I’d say that Everdark Tower is easy in the beginning and tougher in the late stages, while Archlion Saga is the opposite. At any rate, both games are totally worth playing, as they provide different experiences under a similar visual and aural coating. 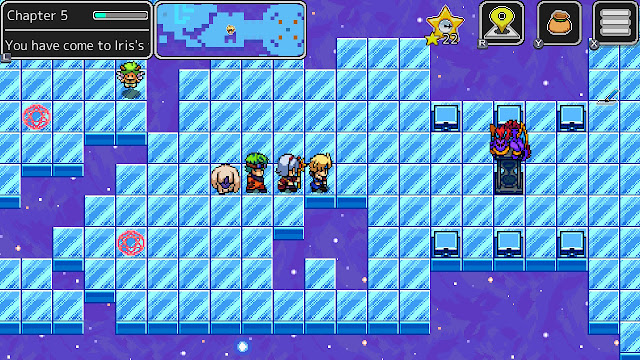 I had a lovely time playing that pair, and I’ll certainly play them again when I crave a grindy quickie. Trust Kemco to provide the very essence of RPG in a pint-sized package! Talking about this, I finally caved in and purchased all digital Kemco RPGs currently available on the Switch. That makes a whopping 20 titles, which will certainly be joined by others before the end of the Switch’s tenure; they’re all safely nested on a dedicated SD card, ready to be played at leisure. With that said, I’ll see you soon with my gaming instinct’s next pick; in the meantime, dear fellow gamers, keep playing and take care!

Aokana’s route system is as straightforward as they go: forget about affection meter and hidden flags, landing on your desired route is determined by a single — and pretty obvious — dialogue choice. The common route comprises a whopping six chapters, while the girls’ routes comprise two to three chapters; while this may seem a tad unbalanced, it actually works perfectly, as you get to know the whole crew before diving into romantic entanglements. I’ll lay down the routes in the order I played them, which happens to be the order suggested by internet wisdom; without further ado, let’s get to it! 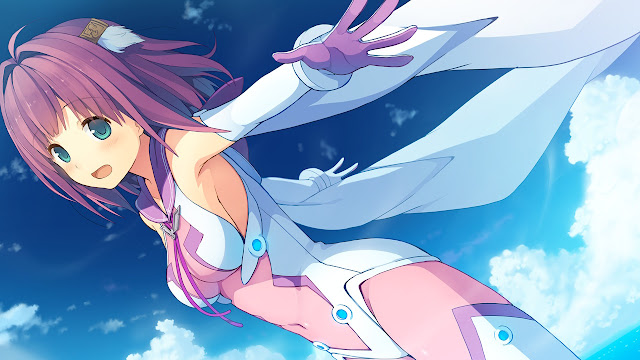 Rika is the goody-two-shoes of the crew, a highly focused girl who works hard to improve her game; while that seriousness and dedication of her are commendable and would get her far IRL, they do little to improve her case in a gal game. She’s a complete stick-in-the-mud with — excuse my French — a real poker up her arse, a killjoy who takes everything literally and seems addicted to getting embarrassed and apologizing. Yet she’s also quite touchy with a bit of an angry streak, and she’s highly territorial when when it comes to FC.

I’ll admit it: Rika is my least favourite girl by a very long shot. Her personality didn’t click with me at all, and her dull looks did little to improve her case. Still, I have to admit that said dull looks are perfectly consistent with her serious personality, and commend the writers for introducing such an unflashy character and sticking with her to the bitter end. She’s the perfect embodiment of the Japanese gaman, and I’m pretty sure she has aficionados out there.

As for me, I tried to focus on her story rather than on her looks and personality, and I ultimately enjoyed her route enough not to regret playing it. Sure, her story keeps in character by being the most uneventful of the bunch; still, it was heart-warming to see her get out of her comfort zone, learn that enjoyment and dedication can go hand in hand, and save herself and her childhood friend while remembering that FC is darn fun. 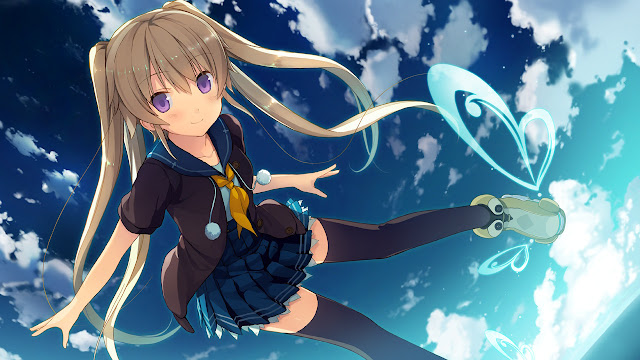 A.k.a. the resident tsundere. Tsunderes are usually not my cup of tea; but Mashiro is so zesty, cheeky and generally hilarious that she made it work. And of course, it also helps that she actually hides a much deeper, layered and nuanced personality under her tsundere coating. Her dedication to all things Misaki masks a desire to belong and an intense fear of being left stranded with nothing to hold dear; and it’s not long before the veneer cracks and she realizes that my oh my, it’s not love that she’s feeling for her senpai.

Mashiro’s torturous relationship to FC can be summed up in four words: feeling like a fraud. She initially took on FC because of Misaki, yet ended up loving it in earnest; yet she remains quite average at it, while being surrounded by uber-talented people in the club. We can probably all relate to that feel of being kinda out of place despite genuinely liking what we do — which is why it’s immensely pleasant to see Mashiro finally overcome her insecurities and make peace with herself and her limited FC abilities. 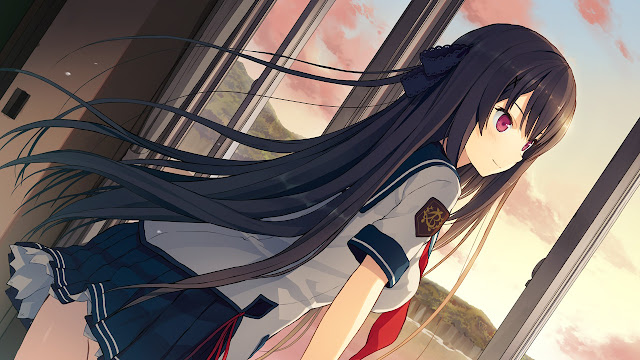 All hail my favourite lady! Darn, Misaki Tobisawa is the sh*t. She’s fun, witty, quirky, and so similar to MC Masaya Hinata that she could basically be a female version of him. Not only that, but Masaya and her have a common FC-related past, and learn to overcome their limitations and fears together while falling in love with each other. I swear, Misaki’s route totally has ‘canon’ written all over it.

Yet that’s not all, folks. Misaki’s route fascinated me because it touches on the deeply interesting and interwoven problematics of innate talent, improvement through hard work and fear of failing. Both Masaya and Misaki cannot bear the thought of losing against FC players more talented than themselves; yet at the same time, they’re reluctant to work harder to improve and overcome their limitations. Claiming that they reached the natural limits of their abilities and giving up on FC entirely is a convenient way of protecting their ego, while saving themselves the hassle of training and the risk of further failures. Yet that protection comes at the cost of their passion for FC itself; something’s ultimately got to give, and that something is (fortunately) their fear of failure. Shindo Kazunari shows them what inborn talent backed up by consistent training can do, and he becomes a model to emulate for Misaki and Masaya — and the reader as well. 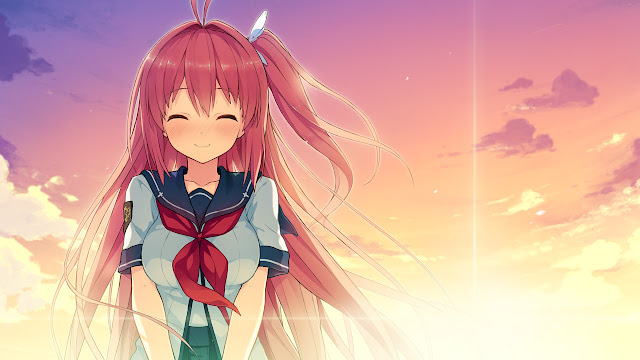 Asuka kinda has a tie with Misaki in my heart. I dig her infectious good mood and stubborn positivity, and her burning love for all things FC is so contagious that it makes me want to dive senseless into my own hobbies. Beyond all that, I’m fascinated by her monstrous innocence when it comes to FC. She’s the only player who can keep enjoying matches in the face of loss, cheating and physical abuse; that passion borders on a total lack of moral and limits, and it makes her kinda terrifying in her fellow FC players’ eyes. As for me, I completely relate to that side of her: she’s a good sport with a consuming passion, and that’s totally something I want to emulate IRL.

Beyond offering a positive and highly loveable role model, Asuka’s route explores the transformation of a sport — and by extension of any industry — as it slowly leaves the amateur sphere and reaches professional levels. Saki Inui represents the frightening, fun-devoid side of professional practice: she’s all about winning, even if it means renouncing the very spirit of FC and everything that makes it enjoyable. Asuka fortunately manages to overthrow her, and to expand FC competitive horizons through clever use of shoe settings while she’s at it; yet the threat of schism remains looming, as Irina is not quite ready to renounce her ‘true FC’.

As a gamer who’s followed the evolutions of the gaming industry for the past 30 years, I cannot help but spot similarities. Just like FC, gaming was originally an amateur affair that was all about fun and experimenting, before morphing into a full-blown industry as it aged. Fun now has to share the stage with business; yet as long as it endures, the essence of gaming will be preserved.

Aokana is much more than a mere romantic romp, and that’s what makes it so awesome. This is a deep and nuanced story about the levels of involvement in things we hold dear: being good but stiff, feeling not legit yet wanting to progress, being talented yet reluctant to work, being passionate and wanting to progress no matter what. I don’t have much more to ask for, really: just a mere fandisc that lets me romance my beloved Reiko Satouin, a.k.a. the girl that should totally have been a romantic option in lieu of Rika Ichinose. With that said, I’ll see you soon with my new game of the week, dear fellow gamers; in the meantime, keep playing and take care!