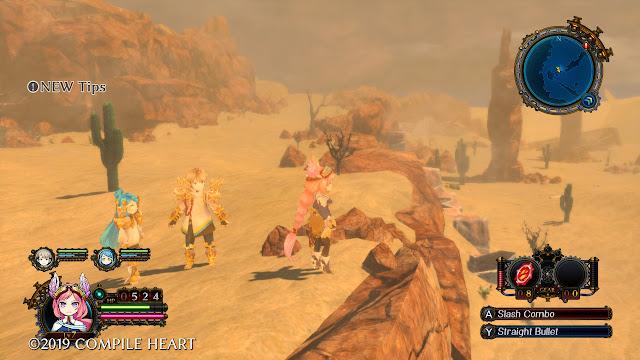 There’s not a shred of irony in that title, dear fellow gamers; and I’m not gonna write that AoA is so bad that it robbed me of my breath, or anything like that. I am totally sincere here; for the third time since I started that blog, I find myself loving to pieces a game that was slandered in reviews. The first two were Hometown Story and Astonishia Story; but with AoA, we’re breaking a new record when it comes to the gap between my own feelings and the general perception of the reviewing community. 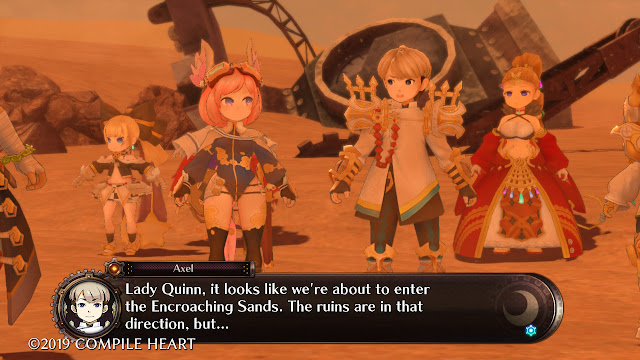 See, we’re talking about a game that can claim the horrendous score of 36 on Metacritic, and the dubious honour of being the 6th lowest-rated Switch game on that same site since the machine’s release. Heck, the reviews were so insanely scathing that I gave AoA a hard pass at first, despite the fact that my gaming instinct was very interested by that game. I thought I was done with AoA then; but lo and behold, my gaming instinct roared to life lately and claimed that game, and wouldn’t be swayed by no bad review. I know better than to go against the gaming instinct, folks; and that’s how I found myself ordering a copy of the game, to be played upon receipt. 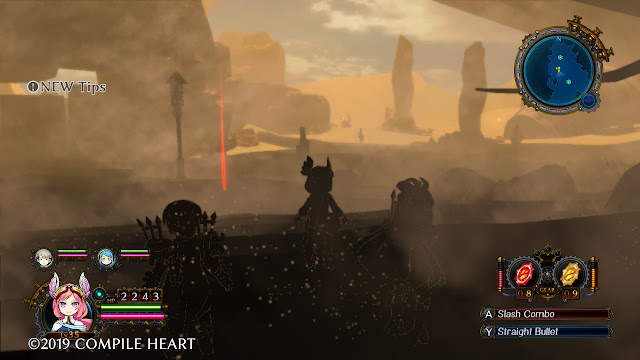 Two and a half hours of play later, I’m deeply in love with AoA — and seriously in awe of it as well. I didn’t choose that post’s title randomly: AoA really took my breath away, leaving me a bit shuddery and disoriented — in a most pleasant way. First thing first, I dig sandy vistas just as much as wintery vistas. In fact, you could say that I dig all barren, arid, open-horizon vistas, whether they be cold or hot: from the Gobi Desert in Terranigma to the Land of Dusk in Ayesha, those landscapes stir something deep within my soul. AoA’s ergs and regs are no exception, and running through them makes my gamer’s heart flutter deliciously. I genuinely emitted a cry of delight upon entering the darkened pass in the Abandoned City for the first time and seeing my characters silhouetted against the gushes of sandy wind. Heck yeah, Compile Heart — do you know I love you more by the friggin’ game? 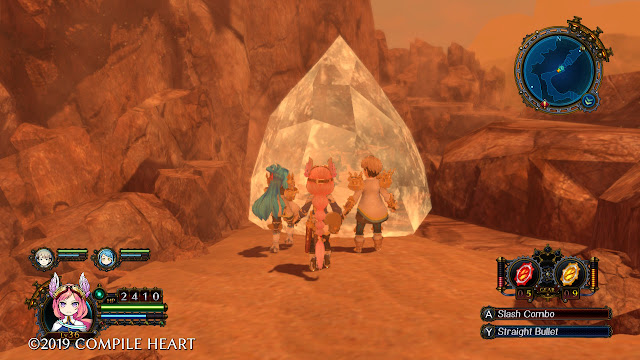 Beyond my being a sucker for all things desert, AoA reawakened that wondrous feeling of wonderment already roused by games such as Legend of Legacy and Myst III: Exile. Once again, I felt like an explorer in an unknown world, left free to piece things together and try to understand what happened. I cannot describe that sweet, puzzled awe that grips my heart every time a contraption pops out of the sand, reminding me that I’m cruising a world full of mysteries. Who built that stuff, and what for? I don’t even want the answer by the end of the game, to be honest; just wondering, and fantasizing about that world, is more than enough for me — especially when it’s backed up by such a splendid soundtrack. Oh boy, that soundtrack! It’s heart-wrenchingly splendid, pure ear-candy that complements the vistas to pure perfection. Let me tell you: I ordered the Japanese PS4 Limited Edition just to get my greedy paws on the OST CD, and I don’t regret it one bit. Compile Heart is totally deserving of that purchase, and more, for giving me so many feels through a single bloody game. 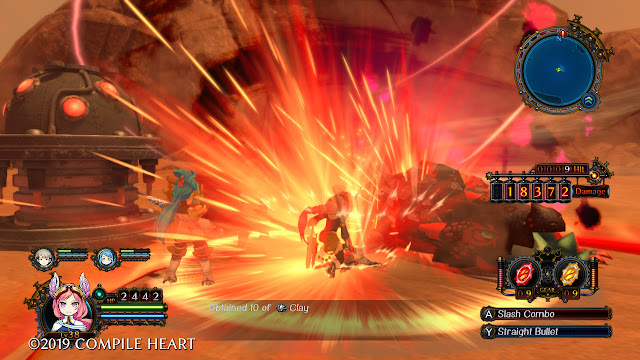 But what about AoA’s glaring flaws, the ones that had reviewers seething and raging? Sure enough, that game is far from being perfect; but it's not that horrendous either. Combat, in particular, is much better than reviews would have led me to believe. It can be a hot mess — that is, if you're too lazy to use the dodging and target-locking features like I am most of the time. When you take the time to use them properly, you gain much tighter control over the flow of battle, and you can enjoy the fulfilling physics and dazzling animations to the fullest. The in medias res story is totally fine by me, because a) I don’t care about stories in RPGs, and b) I kinda like what I’m witnessing so far. I’ve already gone all mushy seeing Jester awaken to emotions through his cat, and I have an inkling I’ll end up shipping Quinn x Gareth and Axel x Micah before I’m done with the game. 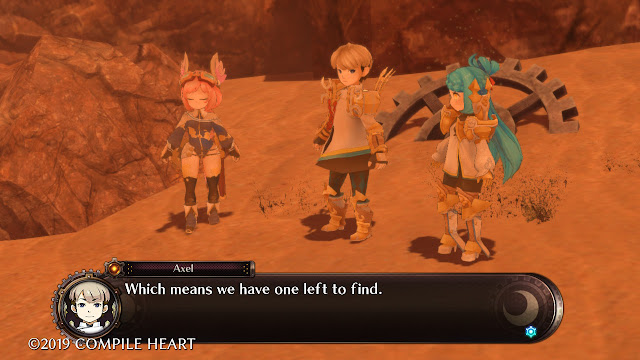 I didn’t quite notice the framerate issue everybody rants about; either I’m very tolerant when it comes to slowdowns in games (which is highly likely anyway), or the game runs better on the Lite than on the regular Switch — and let’s face it, it’s probably a mix of both. What else? I don’t mind the general fuzziness, the lack of detailed backgrounds and the endlessly beige landscapes, because they come with the territory — meaning both the desert setting and the budget game one. I don’t mind the general simplicity and lack of depth of the game, because I fancy a simple and straightforward game as a refresher on a regular basis. Last but not least, I don’t mind the lo-fi graphics, because I’m a complete retro whore, and we all know it. 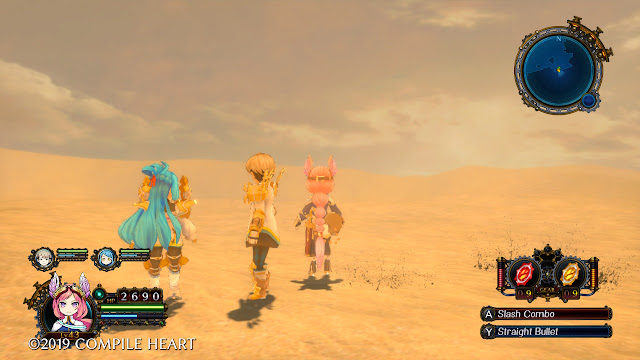 Long story short: I adore Arc of Alchemist. It makes me feel things I don’t feel so often in games these days — wonderment, wanderlust, awe, and the general feeling of being nine years old and taking my first steps into the world of videogaming again. Heck, it makes me feel, full stop; and any game that does that is more than worthy of my undying love. So, what does my loving a nearly universally vilified game prove? Well, it proves that one gamer’s trash is another gamer’s treasure indeed, and that my faithful gaming instinct is the most reliable compass I could ever dream of. I won’t go and recommend AoA still, for fear of making my fellow gamers lose their hard-earned money; but heck, I won’t deny my vibrant feelings for that game, and I totally own them. Until more gaming goodness comes, dear fellow gamers, keep playing and take care! 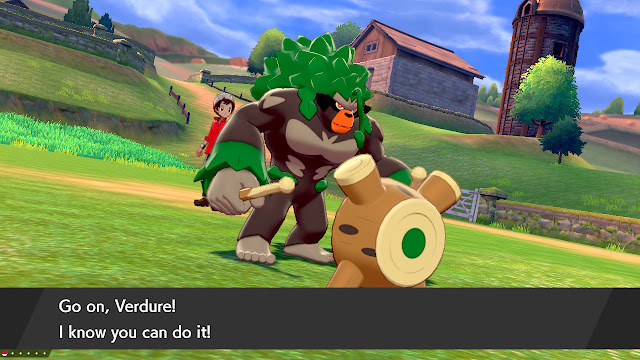 Here comes Galar Grass Starter’s time to shine — and my, did Rillaboom shine indeed. To boast the highest base Attack of all Grass Starters with a whopping 125 is already stellar enough — but wait, there’s more: Rillaboom does actually boast the highest base Attack of all Starters. Like, all Starters since the dawn of the series — let that sink in. My own little Verdure was blessed with a Lonely Nature, which I instantly deemed the best possible stat-altering Nature as far as the Rillaboom line is concerned: Defense being the grass ape’s second-highest stat, it could certainly tolerate a bit of lowering. As you can see below, my Verdure’s Defense was more than decent enough by the end of my run. 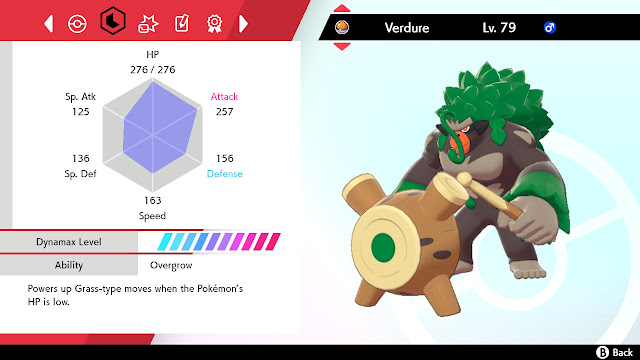 Enough about stats already; let’s talk about Moves, shall we? And my, Rillaboom got ‘em Moves indeed. Heck, it has the widest learnset of all three Galar Starters, hands down! I took a screenshot every time I got a new Move, with the idea of posting them; however, there were soon so many of them that I gave up on said idea. They said a picture is worth a thousand worth, but a good ole list is definitely more palatable than half a dozen pictures:

Bug Move: U-Turn (first time I use the stuff in a solo setting, and it works just fine: with a one-Mon team, your lone ranger just stays put.) 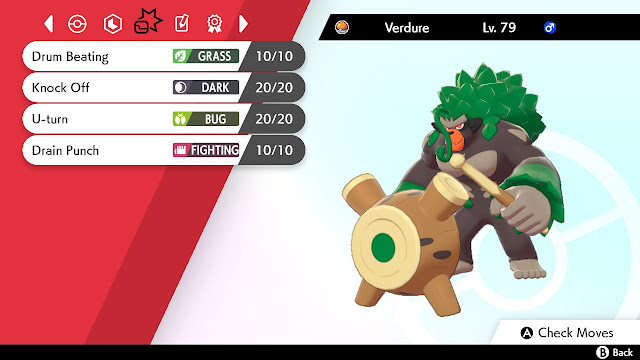 Right above, you have my ultimate Move pool, the one I used to wipe the floor with Leon and his team. I’ll admit it: I was seriously afraid of his Charizard — heck, Grass Type and Gigantamaxing weren’t bound to end well, now were they? However, it turned out that I needn’t have worried at all: two neatly placed Drain Punch took care of that most frightening of final ‘Mons, while conveniently refilling my Verdure’s HP bar to boot. If that is not a most satisfying way of wrapping up a solo run, I really don’t know what is. 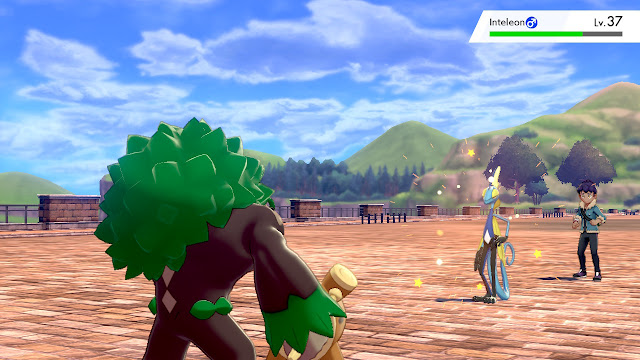 Not only did that run deliver me some mighty fine cruising with a kickass Grass ‘Mon, but it also introduced me to what will be known from thereon as the Great Galar Grinding Galore. If you’ve played S&S already, you know where this is headed: to the Wild Area, folks. The Wild Area, which I roamed for a good hour and a half, plundering Dens like it was going out of fashion. I’ll admit it: I completely lost myself in the grinding and forgot everything — Motostoke, the Gym Challenge, and the very fact that I was playing a Pokemon game. I grinded so hard that by the time I finally emerged from the Wild Area, dazed and sated, my Verdure was boasting an outrageous Lv.49. Sure enough, his EV training was lacking, since those levels were gained solely through the gobbling of Rare and Experience Candies: but my oh my, was that grinding and farming breather insanely good. I think I found myself a new Pokemon kink, and I really cannot promise I won’t make more early stops at the Wild Area in runs to come. 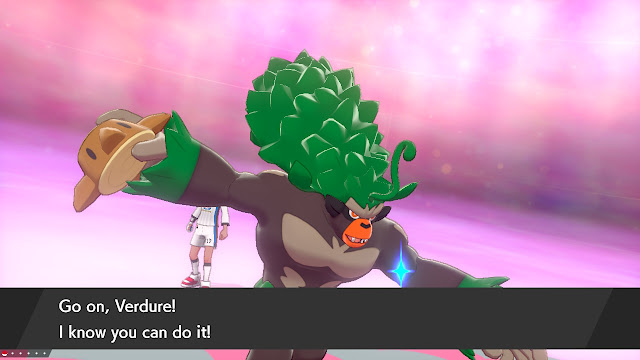 Now’s the time to deliver my final thoughts: Rillaboom is the single greatest Grass Starter created since the dawn of the series — yeah, I said it. He boasts the bulkiness of Venusaur with a much faster growth, the offensive oomph of Chesnaught with much better looks, and a learnset that’s the stuff of solo run dreams. Rillaboom is a kickass Starter, a kickass Grass ‘Mon, and a kickass ‘Mon full stop. I’m glad to part with S&S for the time being on such a fulfilling run; I’ll see you soon with more gaming goodness, dear fellow gamers! 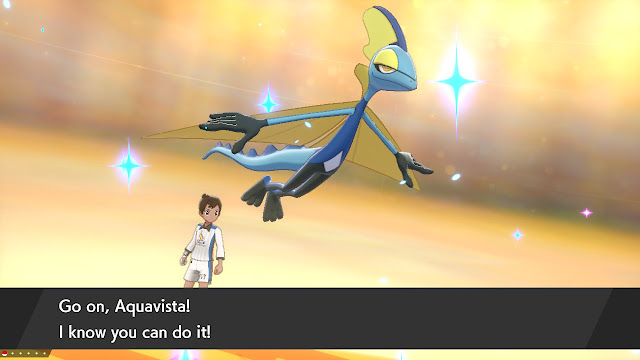 Here comes my second Galar run report, starring the resident Water Starter. RNG granted me a female Sobble, which I gladly took in; I deem Inteleon more consistent with a female-heavy distribution as far as looks are concerned, just like his Sun&Moon counterpart Primarina. 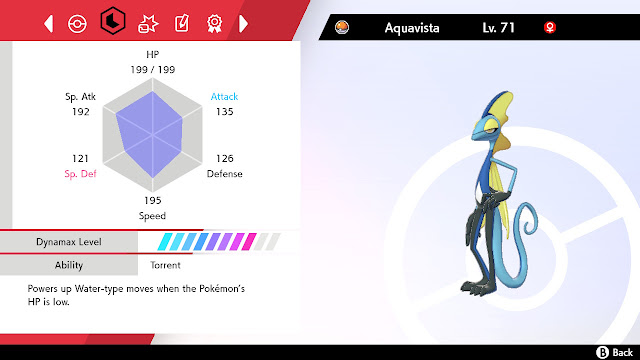 Upon discovering that my little Aquavista boasted a Calm Nature, I started devising plans to make her a mixed attacker. Those plans came true for a while, as I put together a Move pool made of Water Pulse, Sucker Punch, U-Turn and Liquidation. However, I didn’t stick to that pool: Sucker Punch is too iffy to use overall, U-Turn was a bit too weak, and Liquidation couldn’t hold a candle to Scald, Snipe Shot and Hydro Pump. That watery trio became my ultimate Move pool, along with Shadow Ball for extra coverage — all Moves above 80 power, perfect to drown all opposition. I’ll say it: as far as Galar Starters are concerned, the Inteleon line has the most kickass and powerful offensive Moves. 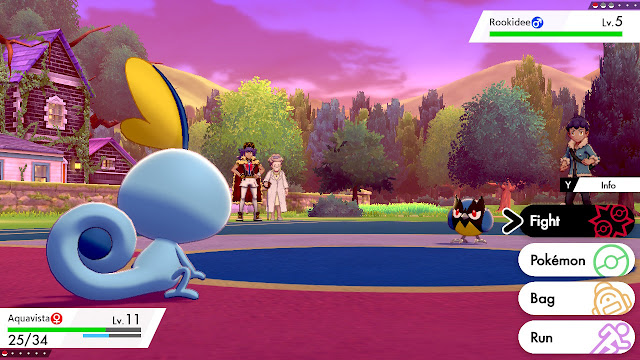 You might think that three Water Moves was a surefire way to put myself in hot water (indeed); however, I breezed through the game’s late stages much more easily than I did with Cinderace, and at lower levels to boot. The only real roadblock was Rose and his team of Steel ‘Mons — not that Water is particularly weak against Steel; the problem there was undeleveling catching up to me. It should have caught up to me earlier, mind you (more on that later); but the late fight distribution is so darn favourable to Inteleon that I could progress much more swiftly than with Cinderace and Rillaboom. 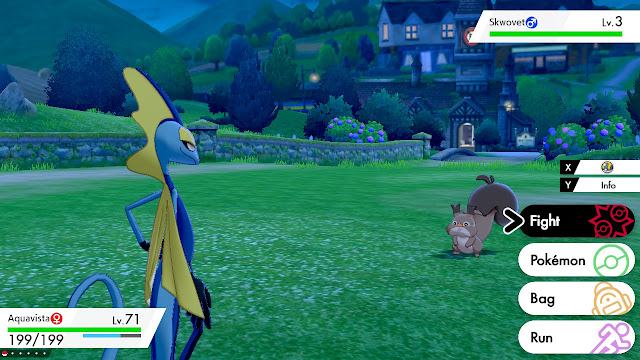 Long story short: Inteleon is awesome, and completely on par with broken Water Starters of Gens past such as Empoleon and Primarina. His design is very much a hit-or-miss thing; but should you hate it, you’d still have to tip your hat to the brilliant James Bond inspiration. (For the record, I friggin’ dug it that design myself, despite the bipedal factor.) I’ll see you soon with more gaming goodness, dear fellow gamers — Pokemon-related or else; in the meantime, keep playing and take care!