Back to business! Well, somehow. Let’s face it: I’ve not been writing a word for a whole month now, and as a result, I feel a trifle… rusty. Before diving back into full-blown reviews and analyses, I am thus going to warm up with this easy-going, self-indulgent post about my latest gaming loot. Said loot took place on some foreign grounds where I dwelt a couple of days lately—foreign grounds that provided me with a much larger choice of games than my home grounds, to my utter delight. Without further ado, here is my latest catch! 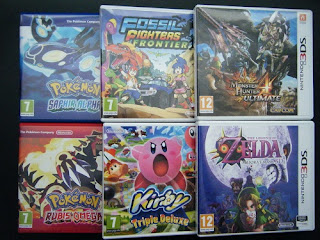 Pokemon Alpha Sapphire/Omega Ruby (3ds): I’ve been longing for this crystalline pair since their release last autumn, but somehow never found the right moment to purchase them. Said right moment finally came in June, when they appeared in front of my eyes in all their glory, sitting proudly together on a display rack. My heart swelled with joy, and before I knew it, the two were part of my collection. Finally!

Monster Hunter 4 Ultimate (3ds): I had my doubts about that game, if you remember well. I wrote something about wanting to check carefully if the 3D used in that monster-slaughtering fest could be stomached by my weak, 3D-sensitive balance system. Well, all caution went down the drain and I was struck by a sudden bout of amnesia as I picked that game from the display rack, transfixed by its gorgeous cover art, and shoved it into my shopping basket. I had not faced physical games in a shop for many months, and… I was overwhelmed by my hunting urges. Let’s hope that this prey will not turn back on me!

Kirby: Triple Deluxe (3ds): Despite the fact that the Kirby series is one of the only series of Platformers that I ever truly loved, this game was never really part of any of my numerous lists of coveted games. This unexpected purchase can be blamed solely on my summer fondness for kawaisa—a fondness that also stroke last summer, leading me to purchase Hyperdimension Neptunia: Producing Perfection.

The Legend of Zelda: Majora’s Mask 3D (3ds): Ironically enough, I encountered a whole wall of these infamous Majora’s Mask golden 3ds in a shop, normally priced and ready for the taking. I guess the shortage is over then! Not that I really cared, mind you; what I wanted was the game alone, which I found without any hassle. Now I can see if Majora’s Mask deserves its cult classic status… When I feel in the mood for it, that is.

Fossil Fighters Frontier (3ds): A brand-new series for me! I had heard about this Pokemon-meets-Jurassic Park formula repeatedly in the last months and had grown curious about it; and when I finally found myself face to face with the thing, I decided to give it a go. Discovering new series is always the thrill, and I hope that Fossil Fighters will live up to my expectations! 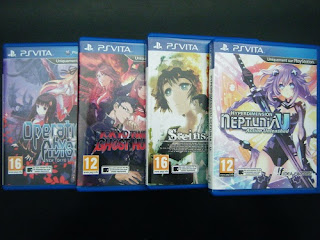 Tokyo Twilight Ghost Hunters (Vita): Despite receiving lukewarm reviews, this game was available in several game shops, unlike other games I fully expected to find (more on that later). Since I had decided to purchase it no matter what and since it was so pleasantly there, I leaped at the opportunity and added it to my fast-growing Vita collection.

Operation Abyss: New Tokyo Legacy (Vita): Another game that received tepid reviews yet was available in nearly every shop I visited. (Every shop that had a Vita display, that is; more on that later.) Is the word “Tokyo” supposed to be a beacon of sorts guaranteeing glorious sales? Anyway, same scenario as above: this game was part of my last list of coveted games and it was mine for the taking, and I certainly didn’t miss the chance to purchase it.

Steins;Gate (Vita): I had little to no hope of finding a physical copy of Steins;Gate, a game that has remained rather confidential since its release despite garnering stellar reviews. I was thus overwhelmed with joy when I managed to unearth a copy from a display rack. I should actually say THE copy, for not only was there only one copy in the whole shop, but this lone copy was also the only copy of Steins;Gate I encountered during my whole trip. Now that is what I call good hunting!

Hyperdimension Neptunia U: Action Unleashed (Vita): Just like in the case of Steins;Gate, I encountered only a lone copy of that game, which I promptly secured. I had reservations about that Hyperdimension spin-off a couple of months ago; however, I played the series’ first instalment lately and completely adored it, and Action Unleashed became an instant must-have in the process. Finding it physical was a huge stroke of luck and makes it all the more precious. Oh, the joys of hunting for games!

Well, that was quite a good harvest—more fructuous than last year, to my utter delight. I managed to get my hands on a good number of 3ds games, which is quite a pleasant change and should be celebrated. It is heart-warming to see the 3ds get some love and good games at last, and I am definitely planning to play some of my latest catch before the end of the summer. An interesting trend I noticed during my visit in shops is the prominence of Inazuma Eleven games: they were everywhere, gloriously advertised as if they were the next best thing to Pokemon—which they probably are, actually. I don’t remember seeing so many of these games or seeing them advertised so thoroughly last year, and to be honest, I was just that close to purchasing one of them. However, the high price and the prospect of not liking the series stopped me, and I decided to be reasonable and to resort to the surefire “old entry test technique” which had worked so well with the Pokemon series: to purchase a cheap old instalment of Inazuma Eleven to test the waters. If it turns out that I love that series, there is going to be a serious Inazuma shopping rampage at some point, let me tell you that.

On the other hand, I noticed a rather worrying trend as I was prowling shops in search of games. I visited supermarkets, semi-specialized shops and full-blown game shops, and one fact was undeniable: the shelf space allotted to Vita games is dangerously shrinking. It was already not that glorious last year, but things seem to be getting worse by the month. Not surprisingly, supermarkets were entirely devoid of any Vita games while stocking the latest 3ds hits; as for specialized and semi-specialized shops, they did have Vita display racks, but these racks were really not that massive, and the choice they offered was quite scarce. For instance, I fully expected to get my hands on Hyperdevotion Noire during the course of my trip; however, it was absolutely nowhere to be found. It is not that bad per se, since this game can be found easily on the internet; but this situation is a tad uncomfortable and may be quite revelatory. The fact that Vita shop space is shrinking while the system has been literally showered with games for a year and a half now makes me think that it may become increasingly hard to get one’s hand on physical Vita games in the months and years to come. My guess is that Vita games will disappear from shelves the very minute the system ceases to be produced, which means that collecting for the Vita is an activity that must be undertaken right now, while the system is still alive and—relatively—well. The Vita is no Nintendo DS: finding Vita games is already quite tedious right now, and it may become excruciatingly hard, if not nearly impossible, once the system’s production stops entirely. Maybe I’m being too pessimistic; but just to be sure, I will stop delaying my Vita purchases. I won’t step as far as day-one purchases or pre-orders, but I certainly won’t wait months before purchasing coveted games—especially now that the Vita is slowly but surely heading towards the end of its life.

All gaming trends aside, my summer 2015 catch was a fairly good one, and I’m definitely planning to clear a couple of these promising games by the end of the summer, if not all of them. Highly unlikely, but who knows? Hope springs eternal in the heart of the gamer with an enormous backlog! For now, thanks for reading, and be my guest anytime!
Posted by Isleif at 10:08 4 comments:

Although I've not been posting for quite some time, this blog is not forsaken, perish the thought. I am currently devoting a lot of time to non-gaming matters, but gaming is still a part of my daily regimen, and I firmly intend to be back into writing as soon as I can—hopefully by the end of June. Until then, thanks for reading, and be my guest anytime!
Posted by Isleif at 17:17 4 comments: