The New Classics #13: Knights in the Nightmare 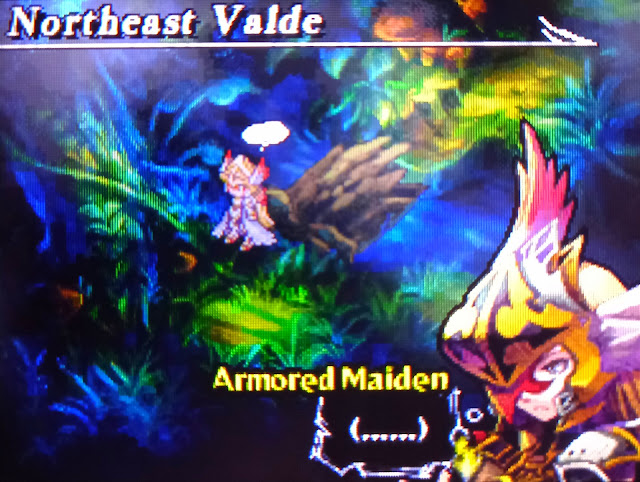 The Backstory: The DS version of that game was one of the first additions to my then budding collection, back in 2012 — if you check my logo picture featuring a space invader sprite created with DS games, you’ll spot it amongst the crew. The cover art and the title immediately struck my fancy; and my interest only grew when I fell in love with Sting after playing Riviera, Hexyz Force, Pandora’s Reflection and Dungeon Travelers 2. Yet, my gaming instinct never compelled me to play that game — but things are different now. My fellow gamer Sieg suggested it in The List’s comments; and since I promised to play all games suggested by my fellow gamers in that context, KitN’s time has (finally) come. 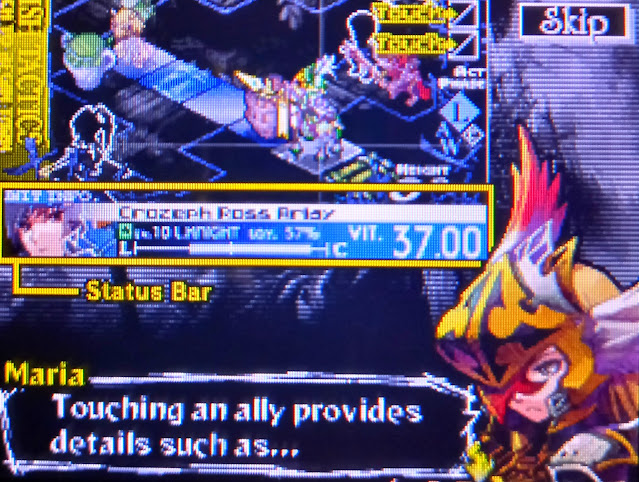 The Game: I first rolled with the PSP version; however, I quickly realised things were not going to work. Not only did the constant loading times piss me off, but the control scheme instantly ruffled my feathers. It was deeply counterintuitive and clumsy; and I couldn’t help but think right away that KitN’s gameplay just screamed “touchscreen controls”. I thus booted up the DS version; and joy and glory, everything felt perfect right away. With no loading time whatsoever and a deliciously intuitive and slick control scheme, I was on a roll. 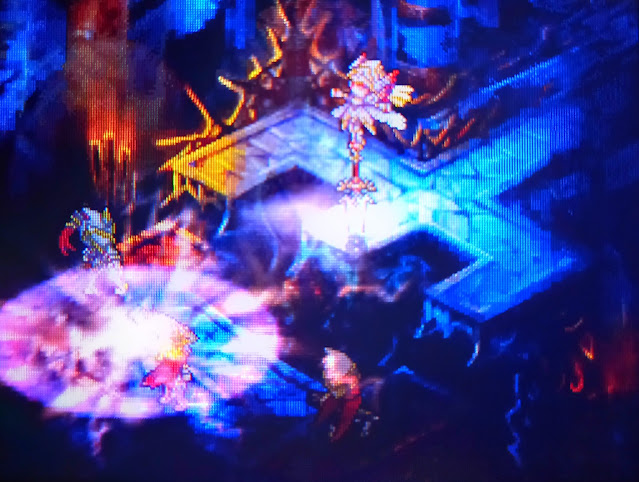 Or not quite, actually. KitN’s first entry on the title screen is called “Teachings”, which speaks volumes: we’re dealing with a game sporting a complex gameplay that cannot be explained in a single tutorial — nor in two or three, for that matter. Said complex gameplay must be apprehended before diving into the game, and mastered to some extent. This bothered me: given the number of tutorials, I wasn’t sure I could clear them all and play some main game in two hours or less. And yet, I had no choice: I tried launching a new game, and couldn’t figure out a thing in battle. I needed to play these tutorials no matter what; and so I did. 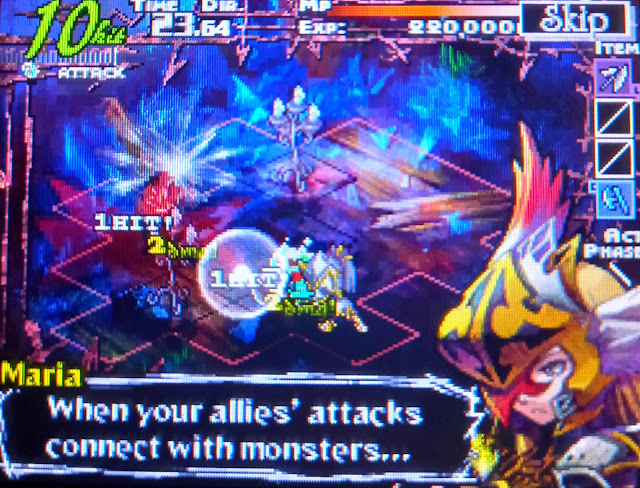 I read and played the whole tutorial section not once, but twice. Once that was done, I was left with two thoughts: a) that’s some seriously meaty and hairy gameplay we have here, and b) I totally wanna play more of it. I launched a new game, cried in joy upon discovering that cutscenes could be skipped, skipped them all thinking I’d come back to them when I played the game proper, fought my first battle… And got my arse completely handed to me. Crestfallen much? You bet! But I tried again, and everything clicked when I figured out something important I hadn’t fully understood despite the mass of tutorials. (For those who know the game: I though dragging a weapon over a Knight was enough to equip said weapon, and didn’t realise you had to hold the weapon there to charge Skills. I was thus attacking with the base weapon and dealing 2 points of damage, and couldn’t finish a single foe.) I was delighted; and as the two-hour mark was drawing close, I decided to stop there. 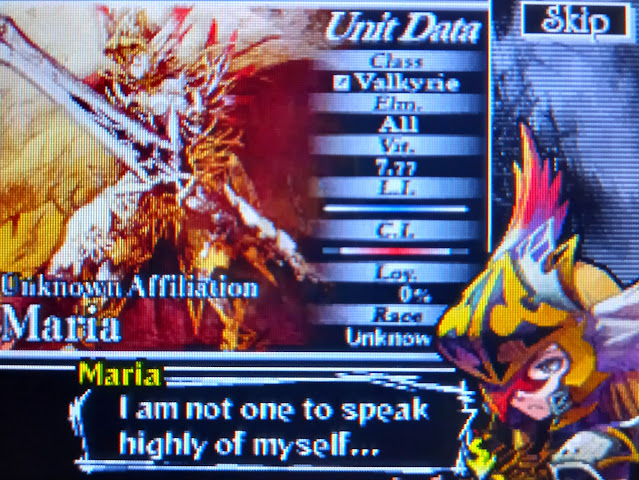 The Verdict: I’ve seen and played enough of Knights in the Nightmare to know that I wanna play much more of it. I wanna fight more battles, get myself more of that sweet bullet hell and work my magic with the stylus. I wanna read the story, recruit plenty of Knights, and learn more about the strikingly mysterious Armoured Maiden. Last but not least, I wanna see more of these splendid graphics, and bask in KitN’s unique atmosphere. This is the first time I encounter a game that manages to be dark and colourful, grim and light-hearted at once; I can’t fathom how Sting’s Product team A managed to pull that one off, but I sure wanna honour their work by playing much more of it. The PSP version sadly has to go, because I cannot stomach the loading times and the controls; but the DS version is very much here to stay. 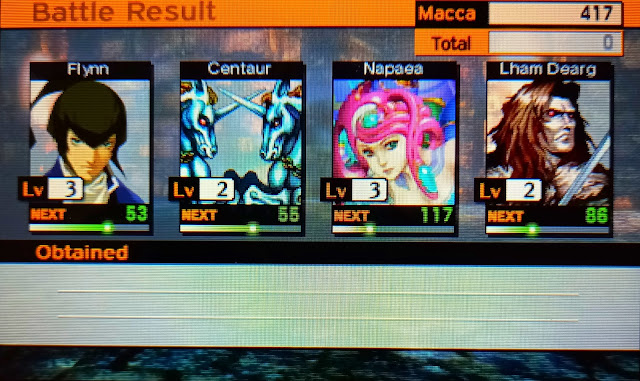 The Backstory: A North-American-only physical release, which I imported way back in the days. I’ve long overcome the need to recoup every single game investment; and so, I can allow myself to be fully honest towards that game. I kinda knew the series’ basic gameplay mechanics, which are supposedly similar to the ones at work in my beloved The Lost Child; and so, I fully expected to have a blast with SMTIV. 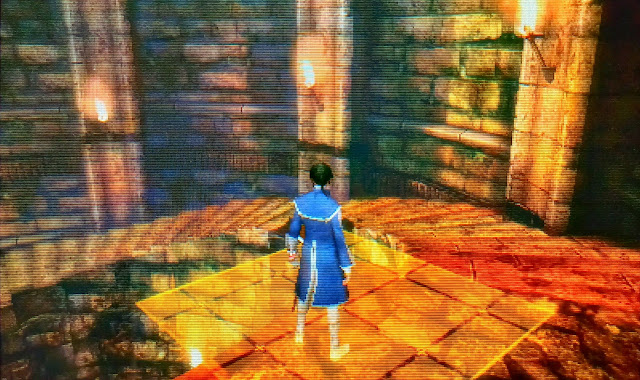 The Game: I certainly had a blast at first; I liked the game’s quick introduction and short tutorials, and I liked even more the fact that I was let loose in a dungeon after fifteen minutes of play. I wanted nothing more than to roam that dungeon to my heart’s content; however, the game was not exactly ready to humour me. 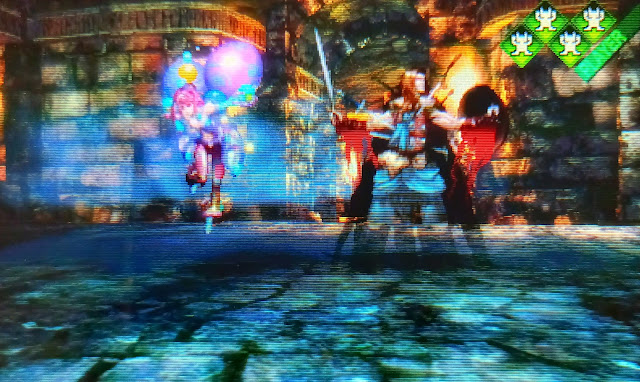 See, SMTIV is hard. Like, ‘save every 30 seconds’ hard; like, ‘every battle could be your last’ hard. Mind you, I’m perfectly fine with that, as long as the game does allow me to save every 30 seconds — which SMTIV nicely does. However, it doesn’t stop there; it’s also ‘you need to strategize every step of the way’ hard. Foes are so powerful, even in the early stages, that using the elemental complementarity system to the fullest is kinda mandatory to win battles — or to survive them, for that matter. And guess what? I don’t like that, oh nooo precious. 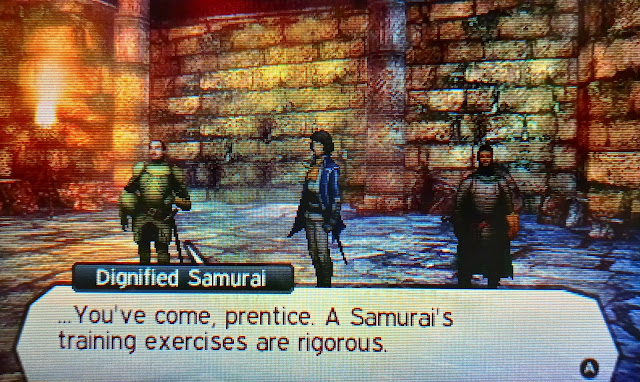 What I like even less is the fact that recruited demons evaporate and disappear from my party when they are knocked out cold. I don’t remember this happening in my beloved The Lost Child, which means that: a) fainted demons mercifully don't disappear in TLC, or b) TLC is so easy that my demons didn’t faint even once. In SMTIV, it takes a mere two blows to send a demon packing; and as recruitment is a bit tedious, you can’t replace them on the fly as smoothly as you’d like. 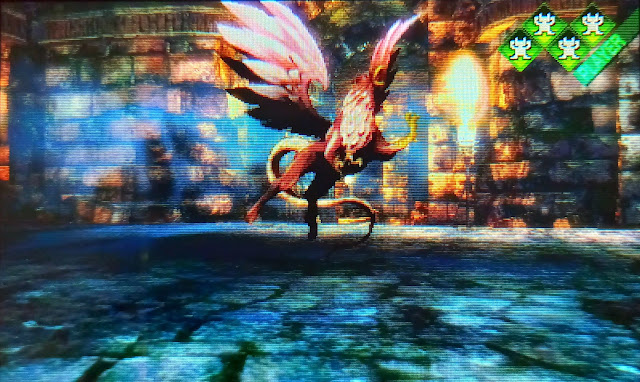 The Verdict: I was left a bit disoriented and unsatisfied by my first foray into the MegaTen series. Combat feels kinda tedious, the demon collection gimmick really doesn’t resonate with me, and the game’s brand of ‘hard’ is not my cup of tea. Mind you, I’m not swearing off the series yet; now that I know what to expect, I’ll give each entry a quick try, and see if some of them strike my fancy. At any rate, SMTIV is no cult classic of mine; and as it’s a North-American game, I’ll gladly let it go. 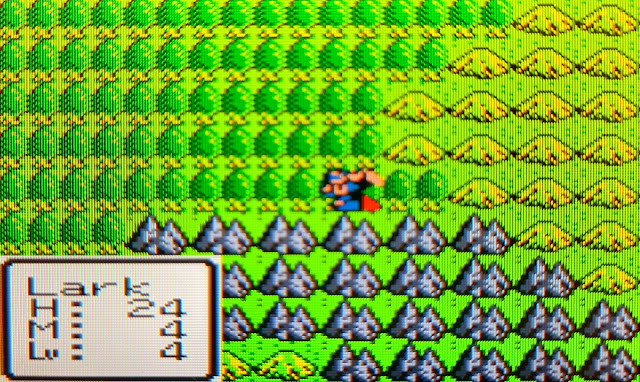 The Backstory: We’re dealing with a legend here, dear fellow gamers! The first ever Dragon Quest entry, which has been ported on so many platforms that I own two versions of it already. Of course, I had to decide which version to play first; and since I’m in a bit of a retro mood, I choose the North-American Game Boy Colour version known as Dragon Warrior. Upon booting up the cartridge, I noticed that the battery was depleted; yet that could easily be fixed, as my favourite gaming shop offers battery changes. But first, I had to determine if the game was worth said change; and so, I polished off my two hours of play in one go. 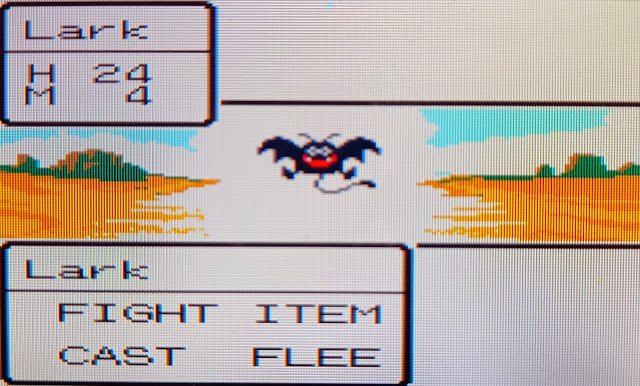 The Game: Oh joy, oh glory! Right from the first frame, I was immerged in that retro goodness I love so much. The graphics were so deliciously Game Boy, and the music… Look, I nearly cried with happiness upon hearing these splendid chiptunes. It certainly doesn’t hurt that the melodies are pure ear-candy — especially the overworld theme, which I could listen to for hours. 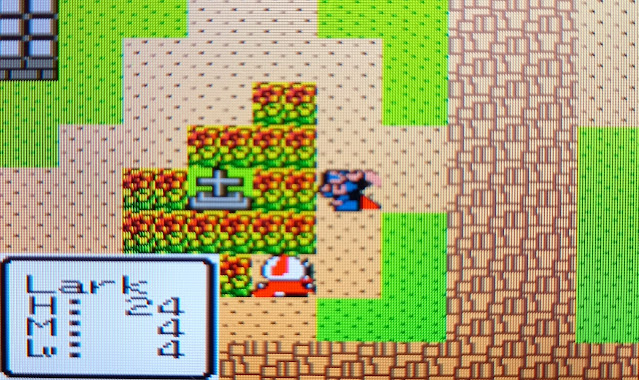 I kinda did, actually. I was let loose in the game world after the shortest briefing from the resident king, with nothing to halt me bar the levels of roaming enemies. Oh, to be free in an RPG again! I could explore the world at my own pace, and I first settled on a clear-cut objective: to get the funds to purchase the Copper sword. That goal was reached slowly but surely through slime eradication, and I could finally get that coveted sword and progress a bit further on the game world. 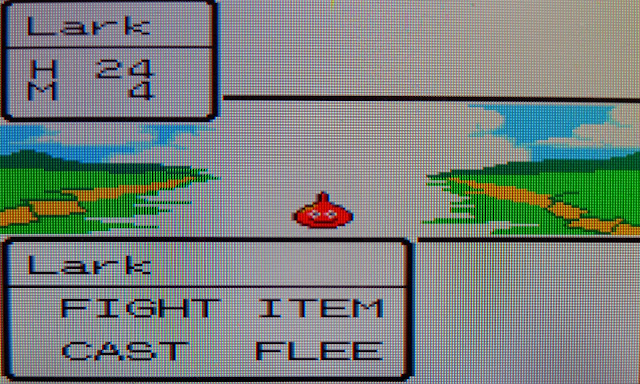 I wanted nothing more than to keep exploring while pursuing such nicely simple goals; but alas, the two allotted hours came to pass, and I had to bid my run adieu. My next goal regarding that game is most definitely to get a new battery; and the next goal after that is to play the whole thing. 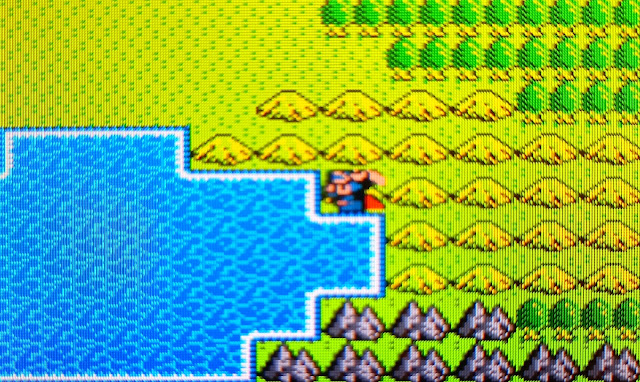 The Verdict: No suspense here, we have a New Classic on our hands! I’ll obviously hold onto that Game Boy Colour version; and I’ll also keep the Switch one while I’m at it, because why not. I’ll play you again, Dragon Warrior!