Sword of Mana: Disappointing on both counts (3) 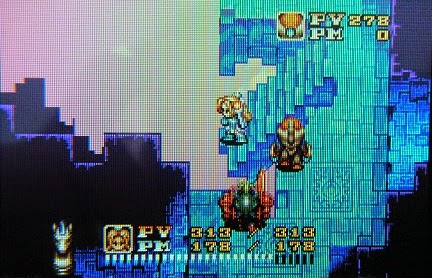 Here comes my third and last post about Sword of Mana, in which I will give my final thoughts on the matter and then rest my case for good. Here we go!

I’ve expanded profusely about how Sword of Mana was the gaming equivalent of a half-hearted donkey stuck between a bucket of water and a stack of hay, and that ranting of sorts may have given the impression that I absolutely hated it; however, and funnily enough, that is not the case. Sword of Mana is an unpolished game that doesn’t know where it stands and what it wants to achieve, that much is undeniable, but it’s not a horrible game by any means. I actually liked it, and did so enough to clear two playthroughs in a row. I definitely had good moments playing it, and even if it was an underwhelming experience as a whole, I will probably come back to it in the distant future.

In all fairness, Sword of Mana does have redeeming qualities. They are not prevalent enough to erase the flaws I’ve mentioned earlier and make that game a masterpiece, but they are present nonetheless and make Sword worth playing to some extent. I have to be fair and mention them, starting with the most obvious one: the gorgeous graphics. Sword is undoubtedly one of the most beautiful games on the GBA, treating the player’s retina with lush and colourful decors, landscapes and vistas. Colours are vibrant and shiny and rendered in a truly beautiful style that’s halfway between colour pencil art and watercolour painting. They skilfully alternate between delicate pastel nuances and clashing vivid hues depending on the context and manage to create a mesmerizing atmosphere. Next in line, and encompassing the former, is the splendid art direction. It’s immediately recognizable and distinctive, with excellent character models that stray from the usual cookie-cutter anime style that plagues too many JRPGs, gorgeous outdoors that beg to be roamed endlessly and lovely town designs that make you want to linger there forever. The graphics’ intricacy and precision are stunning, especially compared to your average GBA game: the whole game world bristles with elaborate details, and the textures are incredibly well-rendered. Whether it be the rugged surface of a rock, the soft fabric of a carpet, the polished gleam of metal or the smooth patina of centuries-old cobblestones, everything is vibrant and lively, all the while remaining beautifully stylized and highly evocative.

As a whole, it’s fair to say that Sword of Mana completely nails that very specific Seiken atmosphere that aficionados of the series have come to know and love. This is a Seiken game at heart, and it takes but a glimpse to confirm that; stare longer, and you’ll be swept away by that inimitable Mana charm and carried into a place of true beauty. Basking in that unique atmosphere is an absolute pleasure, and one that I certainly indulged into during my playthroughs. 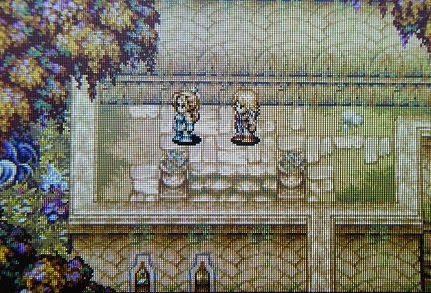 In light of that distinctive Mana atmosphere, I can see very well what Square Enix and Brownie Brown may have tried to achieve here, and even condone it. The Seiken series didn’t start the way we know it today: Final Fantasy Adventure/Mystic Quest was initially nothing more than a Final Fantasy spin-off with a strong action-adventure flavour. It’s been rightfully described as a mix of Final Fantasy and Zelda, featuring the epic grandeur of the first—along with Chocobos—and the dungeon puzzles of the second. It’s only with its second entry, the immensely popular Secret of Mana, that the Seiken series declared independence from its venerable parent and became its own franchise with highly distinctive qualities. The original, however, remained what it was, a slightly stinging reminder that Seiken was indeed not always its own series. Ten years passed and three games were released, each one expanding on the Mana mythology and deepening the specificities of the series, and it seemed that Seiken was on good rails and promised to last. What better idea, then, than to give a good lifting to that somewhat mismatched first episode of the series and make it more cohesive with the subsequent installments? It would also be a fantastic opportunity to introduce the Mana lore to a new generation of players on the then brand-new Game Boy Advance. This was a great idea, and it seemed that Square Enix was really serious and committed about it, to the point of bringing Brownie Brown and its wealth of former Squaresoft employees into the picture, and a dazzling gem of a game could have been expected from that match seemingly made in heaven. However, as we’ve seen before, things didn’t turn out so well. It’s really quite a pity and a shame, for Sword of Mana could have been one of the greatest RPGs on the GBA and another immaculate entry in the Seiken series instead of the marginally good game it turned out to be.

Worse, Sword of Mana also started for good what I would call the ‘Mana Decline Discourse’. It had been simmering prior to that with the release of Legend of Mana on the Playstation: many players were perplexed and disconcerted by the open structure of that game, which offered a swarm of sidequests and a huge variety of objectives in lieu of the usual main quest with a rock-solid narrative. This was a departure from the series’ template, and one that didn’t please all; many players and critics resented it, all the while hoping that this was only a misstep and that the next game would be a return to form. But then came Sword of Mana and its lack of greatness, and it cemented the perception that the Seiken series, after having culminated in Secret of Mana and Seiken Densetsu 3, was now sadly going downhill. The responsibility of Sword in the expansion of the Mana decline discourse is enormous: had it been a great game on par with the 16-bit era entries, the notion that the Seiken series was waning would have been buried before it was fully born, with Legend of Mana being considered a simple mistake—and very likely, as time went on, as an underrated experiment worth rediscovering. Instead of that, Sword single-handedly embedded the notion of the series’ decline in the minds of critics and players, and it persisted to that day, since Square Enix didn’t bother to dispel it by releasing a great Seiken entry that could have become a cult classic.

The time has come to rest my case for good, folks. And here’s my verdict: despite the fact that I’m a die-hard Seiken aficionado and that I enjoyed it to some extent, I really can’t ardently recommend Sword of Mana to anyone, for this game is too unpolished and unfulfilling to deserve such a thing as a enthusiastic recommendation. Still, that doesn’t mean that it’s totally unworthy and shouldn’t be played at all costs, for there is still some good in it. My final words on the matter will thus be these: if you want to play that game, be prepared. Know what to expect and what you’re stepping into, and you may avoid the disappointment that plagued me. And also: heck, I’m really curious about Final Fantasy Adventure now. Gee, let’s add it to my Must-Play list of retro games! And as always, thanks for reading, and be my guest anytime!
Posted by Isleif at 11:12