Sword of Mana: Disappointing on both counts (2) 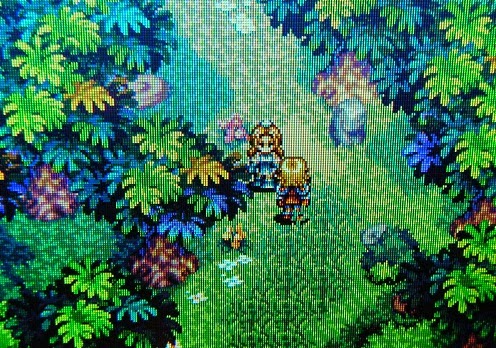 So, here we are again, for the second part of my rant about Sword of Mana. In my last article, I’ve explained why I felt strongly that this game failed as a remake, so it’s now time to move on to the next step and examine things under a different light. For at this point, it’s seriously possible to wonder if Sword of Mana was indeed intended as a remake. Maybe this is not the right angle to consider it, and maybe this game should be envisioned as a brand-new entry in the series rather than a remake. However, that doesn’t solve the issue at all; it only moves it to a different terrain. If this game was indeed supposed to be a fresh installment, then it fails miserably at it all the same, and here’s why.

Failing as a brand new Seiken game: Luxuriating in laziness

Once again, things don’t exactly start well: there is an blatant and unmissable sign that if Sword of Mana is indeed supposed to be a shiny new game, then it’s not going to do a very good job at it. This sign lies in the very concept of ripping off the storyline of an older game to reuse it as the base for a new game, which is an idea that oozes absolute and unashamed laziness through every pore. Furthermore, there is also the small issue of the copy-pasting of all these features from older Seiken entries, which is also a tiny weeny bit lazy. I won’t expand further on these points in that second part, for I already gave them a run for their money in the first one.

Instead, I will expand on the fact that if Sword of Mana also fails as a brand-new game, it’s mostly because it regresses on all counts compared to the SNES episodes. This is quite ironic considering the whole ‘stealing-from-former-installments’ pattern of this game; but stealing a feature and implementing it well are two very different things, and nowhere is this more painfully obvious than in Sword of Mana.

First to get a grilling is the fighting system. An Action-RPG lives and dies by its fighting system, and most specifically by the physics of the said fighting system. And in Sword, the physics are mediocre at best. They are not broken, granted, but they remain deeply unsatisfying. The enemies’ hitbox is wobbly and tends to vary from one foe to the next, and sometimes from one blow to the next; as a result, you can never be completely sure that you will land a hit, which is deeply frustrating. Worse, your own hitbox behaves in the same erratic way, which can lead you to take damage when you least expect it; and since there is no way to block attacks, you have no choice but to run away and try to reposition yourself. There is supposedly a 3-hit combo that can deal more damage, but it’s incredibly hard to pull off and fails more often than not. The magic doesn’t fare better, sadly. Casting spells is a clunky and imprecise process that takes way too much time for its own good—and for your own, en passant. To add insult to injury, someone came up with the brilliant idea of assigning a limited range to spells, making them virtually identical to weapons—only less efficient, since it takes longer to cast them. Maybe the range actually increases as you level up your magic, but since I didn’t bother to do so, I have no idea about it. I suppose one could blame me for not having pushed the system to its fullest potential, but here’s the point: this system simply doesn’t make me want to use it at all, which I consider a failure per se. A good Action-RPG fighting system is immediately compelling and intoxicating and makes you want to come back for more and deepen your mastery of it; if it fails to do so, then it’s just not a good system, period. Granted, the use of magic in Action-RPGs is often a tricky business with mixed results; but Secret of Mana and Seiken 3, of all games, had a perfect magic system that was simple to grasp, pleasant to use and, last but not least, incredibly efficient. Since nearly everything in Sword comes from former Seiken entries, why not import this as well, instead of coming with a clumsy new system? As a whole, the physics are quite difficult to grasp and it takes a ridiculously long time to do so; and even after it’s done, they still remain largely unfulfilling. 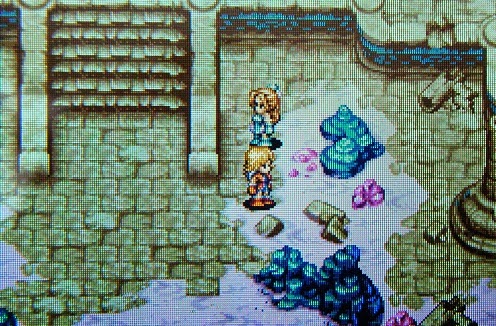 Second in line to get a serious roasting is the abysmal implementation of your ally—or allies, as you actually travel with a second character that regularly switches with others; once again, a good idea on paper and a miserable failure in-game. The AI in Sword is simply the worst I’ve ever seen in any Action-RPG, Seiken-related or else. I’m already not too fond of having to put up with allies in my Action-RPG; given that they are often implemented in a deplorable way, they end up feeling more like giant boulders than helpers, and turn your epic lonely adventure into a tedious escort mission. But this game raises the inefficiency bar to a whole new level and cranks the irritation meter all the way up to eleven. Not only do the resident allies ruin my pleasure of roaming the world alone as a brave adventurer, but they are also absolutely, completely, totally useless. They can’t position themselves properly in order to fight, and even when facing enemies, they either don’t attack or attack in the wrong direction. They don’t run away from attacks either, preferring to stand there stupidly and get killed instead; I swear that my ally of the moment often got killed a mere seconds after I entered a screen. Of course, they won’t heal you either; in fact, they won’t do anything truly useful—except if you count standing in your way and hindering your attacks as useful. Better not talk about the pathfinding, which is just pathetic: if you think Secret of Mana was bad in that regard, you’ve seen nothing, for Sword is a million times worse. I swear that this boulder of an ally that you have to bear at all times is like a giant blister on the sole of that game, stinging you every step of the way. And once again, it’s an absolute regression, given that Seiken 3 had reached near perfection regarding the implementation of allies. They were a real help, their pathfinding was spot-on, and as a whole, it was a pleasure to have them around—even for a loner like me. Square had nailed the perfect AI settings a full decade before Sword was even in the making, so why not carry them over to that game? I can’t see any reason for it except for sheer laziness, really.

I still have a bit of grilling to inflict to miscellaneous points that scream laziness and further strengthen the failure of that game as a shiny new Seiken installment. Lo and behold, here’s the accursed list:

—The boss battles are an absolute joke. They seldom last longer than a minute or two, and it’s usually a matter of a couple of hits before the boss dies. Compared to the boss battles in Secret of Mana and Seiken 3 that could last ten to fifteen minutes at most and were an intense and incredibly rewarding test of endurance, this is just pitiful.

—The world map is unclear: you can never see yourself on it nor have a precise overview of it, so getting a good notion of where places are located is quite a struggle. Not only that, but travelling between towns is highly unpractical. Flammie is not present in that game to carry you around in a beat of her wing, leaving you with the sole options of walking or using canons to travel. This is very impractical and definitely doesn’t encourage backtracking in order to fulfill the numerous sidequests.

—The soundtrack was hardly remixed and sometimes sounds like it’s been pulled straight from a NES game. I know the GBA doesn’t have the best sound chip under the gaming sun, but I’m sure it was possible to do better that this. Not to mention the fact that it doesn’t really make sense to have music pulled straight from an older game in a supposedly brand-new entry, now does it? But hey, let’s stop with the rhetorical questions. It’s pretty clear by now that Sword is not a satisfying brand-new entry, and this point only further confirms it.

—The female and male paths are too similar to each other. Having two different playthroughs was a really neat concept that could have turned out into something truly brilliant; instead, laziness took over once again, turning this good idea into a missed opportunity. The differences between the two playthroughs revolve mainly around narrative elements and character interactions, while it would have been much more interesting to explore entirely exclusive dungeons in each one. Granted, the male path offers a couple of dungeons that are absent from the female path, but this is simply not meaty enough. Square Enix and Brownie Brown didn’t carry this interesting concept the whole way, and that’s really a pity.

Once again, I’ve made my point: Sword of Mana is not satisfying as a brand-new Seiken entry. On top of resorting shamelessly to recycling elements from its predecessors, it fails to offer a polished and smooth gameplay experience. It’s shockingly sketchy in some departments and gives off an overall feeling of incompletion. Compared to the previous entries, it is most definitely a regression, and this cannot be explained solely by the fact that this game was released on a handheld console. The GBA library contains tons of games with clear-cut, precise and polished gameplay—heck, the original Gameboy itself has dozens of them—so hardware limitations are not to blame here. Blame rather Square Enix, Brownie Brown and their lack of commitment to that game.

Once again, I will stop here for the time being. In my third and last article, I will wrap things up for good and rest my case about Sword of Mana. As for now, thanks for reading, and be my guest anytime!
Posted by Isleif at 21:18