Sword of Mana: Disappointing on both counts (1) 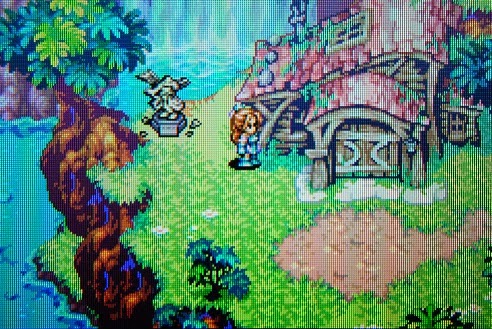 I am an action-RPG veteran, and the Seiken Densetsu series, better known in the West as the Mana series, is one of my favourites when it comes to real-time foe-slashing action. However, like many self-professed Seiken aficionados, my knowledge of the series centers mainly on the two 16-bit era installments released for the SNES. I actually missed most of the Seiken games, including Sword of Mana on the Gameboy Advance; I was thus really thrilled to get the opportunity to play it a good decade after its original release, and I expected quite a lot from it.

Sword of Mana, released in 2003(jp/na) and 2004(eu) for the GBA, had quite an interesting development process. It was originally designed as a remake of the little-known first game of the Seiken series, known as Final Fantasy Adventure in North-America and Mystic Quest in Europe and released for the Gameboy, respectively in 1991 and 1993. The development of Sword of Mana was handled by Square Enix along with Brownie Brown, an independent studio packed with former Squaresoft employees—including some who had previously worked on Final Fantasy Adventure/Mystic Quest. The expertise of the people who created the original, along with all the experience accumulated by Square in ten years of crafting Seiken games; what could possibly go wrong with that picture? Well, quite a lot, unfortunately.

As this post’s title implies, my main gripe with Sword of Mana is that it fails on both fronts. This is a game that doesn’t know if it wants to be a glorious remake or a shiny new entry, and it shows painfully. It seems that Square Enix and Brownie Brown couldn’t decide on a clear-cut orientation for that game and make a satisfying choice between creating a full-blown remake or a brand-new game; as a result, Sword of Mana turned out to be an uneven, gravelly and ultimately unfulfilling mix of both.

Failing as a remake: Betraying the spirit

Ironically, the very first sign that Sword of Mana is going to fail as a remake is blatant and unmissable, for it is embedded in its very title. Instead of reusing the name of the original, Square Enix and Brownie Brown went out of their way to create a different title more in tune with the rest of the series, both in Japanese and English. This is a betrayal of the original game, and a betrayal of the very essence of remaking. A remake is supposed to be an enhanced, glorified version of a game that respects the spirit of its source material while using the latest advances in technology to sublimate it. To use a different name is a very bad start and may lead one to fear that the spirit and essence of the original will be further spoiled and tainted in the game. And that fear would be very well-founded indeed, o yes precious.

Let’s first tackle the story and characters. They are the same as in the original game, which is what you would rightfully expect from a remake. Still, the developers felt compelled to flesh out the story and introduce a measure of character development, which is also quite common in remakes. In order to expand the storyline and make it cohesive with the mythology introduced by latter Seiken entries, the relationships between the characters were reworked and new faces were introduced—or reintroduced, like Isabella from Seiken Densetsu 3—along with a decent amount of extra dialogue and cutscenes. New storyline elements were added as well and the narrative was split between the respective paths of the two playable characters; as a result, you will need to clear both playthroughs if you want to contemplate the full picture story-wise. This all looked really good on paper and could have turned out quite well, but the actual in-game results are absolutely miserable. The clear-cut story of the original game is bastardized and ends up being unnecessarily convoluted, to the point of actually being nearly incomprehensible. It doesn’t help that the characters constantly refer to past events or supposedly famous NPCs like this is all common knowledge, not bothering to explain anything to the poor player who just popped up unaware in their world. The newly created relationships between the characters feel unnatural and forced—most likely because they are exactly that—and the pacing of the game is stilted and uneven. This is not a flowing, seamless game experience—far from it: in fact, it’s nearly possible to pinpoint the additions to the original storyline, so off-balanced and laborious do they feel. There is one particular point that really rubs me the wrong way, even though it's but a detail: they introduced the reincarnation theme, which was totally absent from the original. Not only is it cliché to the point of outrage, but it actually adds nothing to the story, which makes it even more infuriating. Does Square Enix have a secret rule dictating that every one of their RPGs must feature a reincarnated character? I would believe it, given the overabundance of that trope in their productions. And frankly, it's getting old. And boring. 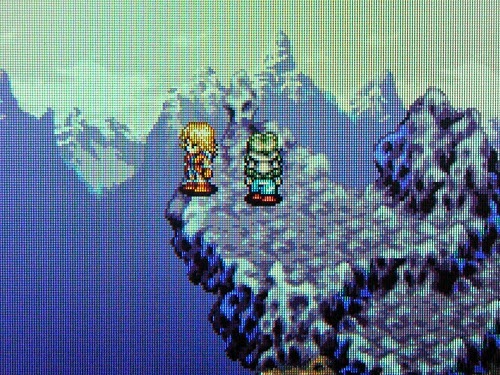 But the disfigurement of the venerable first game of the series doesn’t end here; it goes further and deeper with the inclusion of gameplay elements lifted directly from latter entries. Now, once again, this is something quite common in remakes, and is not bad per se; but in the case of Sword of Mana, it definitely turned sour. The main issue here is that those gameplay elements have not been woven smoothly and seamlessly into the fabric provided by the original; instead of being integrated into the game in a lively, organic way that would enrich and nurture the gameplay, they’ve been basically copied and pasted there, creating a jarring patchwork of clashing elements.

Take the night-and-day cycle, which was imported from Seiken Densetsu 3 on the SNES. It was justified in that game by storyline elements and by the presence of a specific character that would transform at night, and was smoothly implemented in real-time. In Sword of Mana, the presence of that cycle is not justified by anything special, and feels more like a new feature added just for the sake of it; not only that, but it’s implemented in a really clumsy way, with few visible changes from day to night and no real-time progression. Instead, the moment of the day changes when you go from one screen to the next, which is just nonsensical. All in all, the copy-paste of this feature was just plain unnecessary: far from bringing anything interesting to the fold, it only puts an ugly blemish on the face of the original.

Let’s also talk about the forging system, which was lifted straight from Legend of Mana on the Playstation; it’s a wonderfully whimsical mix of gardening and forging that involves growing fruits and vegetables and pairing them with randomly found raw materials to power up your gear. This system is actually twofold: you can either reforge your weapons and armors by using raw materials only in order to increase their stats, which is the simplest option, or modify them by using raw materials coupled with fruits and vegetables in order to modify their properties. This is the most complex option, as it involves growing the fruits and vegetables beforehand by sowing seeds that you find randomly through the game world. Once again, the system is not bad per se; it’s actually quite efficient and pleasant to use once you get the hang of it—and get past the ludicrousness of having to mix forging materials with groceries to upgrade your stuff. The problem is that once again, it’s been blatantly copied and pasted without considering whether it would fit into the canvas provided by the original. And unfortunately, it does not fit well. For all the fluff added to the narrative, Sword of Mana remains a very short and linear RPG, just like its venerable model, and this forging system is simply too complex for such a game. It requires some farming and a lot of experimenting and tinkering, and the pay-off is simply not yummy enough compared to the amount of time you have to invest in that process. I only used the reforging option a couple of times and didn’t bother with the whole gardening thing, and yet I breezed through the game. So once again, it feels more like a caked layer of garish make-up plastered all over the face of the original than like a smooth and masterful relooking. And once again, it totally betrays the spirit of the remaking process by not being faithful to the essence of the original game, which was anything but a farming and forging fest.

If there is something else that the original was not, it’s definitely a sidequest fest, which Sword of Mana is to a fault. This is another element imported from Legend of Mana, whose structure was built around the fulfillment of numerous sidequests of various sorts. Once again, there is nothing wrong with sidequests per se; I actually love them, and usually go out of my way to fulfill them when I play RPGs. However, just like with the forging system, the implementation of these sidequests was done without considering if they would fit into the canvas provided by the original; and just like with the forging system, this is not the case, and for the same exact reason. Given the linearity and shortness of Sword, the sidequests could not be integrated seamlessly into the narrative and feel rather like they’ve been thrown haphazardly into the mix. They are totally disjointed from the main story and don’t add anything to it nor expand on it, which is quite a pity. They force you to backtrack quite a lot, which may have been an attempt to expand the player’s horizons and let them make the game world their own; however, it doesn’t work that well and this forced travelling feels more like a chore than a joy. To add insult to injury, these sidequests won’t give you with anything truly valuable or worth possessing in return: more often than not, you’ll get only a monetary reward for your efforts, which you could have easily reaped faster by slaughtering a few enemies. All in all, they’re not a valuable enhancement that sublimates the original, but rather another ill-advised addition that further bastardizes it.

So, I've made my point: Sword of Mana pitifully fails as a remake. It fails to enhance and sublimate its model, choosing instead to disfigure it Frankenstein-style. Could it fare any better as a brand-new Seiken entry? Well, I won't answer that right now. I was initially planning to write only one article about Sword of Mana, but the amount of things I want to say about that game went beyond my wildest expectations, and my article became a mammoth of an essay. For the sake of clarity and comfortable reading, I will thus stop here for now. I'll come back very soon with the rest of my rant, in which I will expand on how Sword of Mana also fails as a brand new game, and then rest my case and give my final thoughts on the matter. As for now, thanks for reading, and be my guest anytime!
Posted by Isleif at 20:18