Sonic Lost World and Sonic Generations: A miss and a miss


I admit it: the Sonic game I really want to play right now is Sonic Mania, the homage-heavy, long-overdue, critically praised 2D sequel to Sonic&Knuckles. Alas, Vita and 3DS owners were collectively denied the joy of playing that game; and thus I have to make do with erzatz such as Sonic Generations and Sonic Lost World to quell my Sonic thirst on the 3DS. Those two games have been sitting in my collection for, like, forever; it's thus time to give them an opportunity to prove themselves — if only to be able to sell them for good money while the 3DS is still supported in case they turn out to be disappointing. And as you may have infered already from the title alone, those two games were indeed disappointing; and we'll see right away how they failed to dazzle and impress the Sonic fan in me. 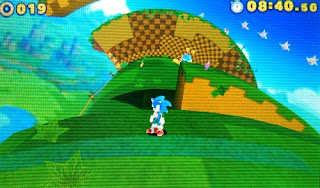 First is Sonic Lost World, the spiritual successor to the ill-fated Sonic X-treme on the Saturn. Resurrecting games that failed to come to existence is a great idea on paper, but it can easily go haywire; after all, those games failed to make the cut in their time for a reason, and that reason may or may not involve unpractical gameplay concepts. And in the case of Sonic X-treme and Sonic Lost World, I'd be more than tempted to assume that the former was indeed shelved because its gameplay proved unsatisfactory and that the latter shouldn't have existed at all in its current form. I've read horrible, horrible things about Lost World's level design and control schemes — a couple of levels being singled out and branded as pure torture tools prone to make even the most seasoned and patient Platformer aficionado ragequit. I couldn't verify this assertion myself, though, because I quit before the end of the second level. I didn't ragequit, mind you; I just quietly put the console down, quietly took the cartridge off and quietly put it back into its box, never to be touched again — all that because I wasn't enjoying the ride.

Mind you, things started nicely enough, giving me good hopes that I could indeed like that game. The controls were sleek and precise, the aerial-based gameplay instantly clicked with me and spiraling up and down the tubular zones was great fun. Sure, said zones were a bit too long for their own good, colours were a bit too dark for my taste, and the music was lacklustre; but I could perfectly live with that if the gameplay rocked. I cleared the tutorial and the first zone without too much hassle; then came the second zone, and I starting falling to my death. A lot. Those repeated falls conjured up horrible memories of Super Mario Land; and with that, the die was cast. I can tolerate tweaks to the classic Sonic formula quite good-naturedly, as my appreciation of Shattered Crystal abundantly proves; but having levels that are basically giant bottomless pits with a couple of platforms hovering around is where I draw the line. And mind you, those early levels are supposed to be easy and forgiving compared to later levels, which makes me think that there's no way in hell I could ever clear that game. I might as well save myself a couple of painful ragequits and spare a couple of good gaming hours by selling Lost World right away. 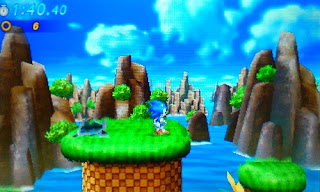 Then there is Sonic Generations, i.e. the game that nearly single-handedly made me purchase a 3DS back in 2011 — before I wisely decided that a DSi with Sonic Classic Collection was a better investment. This game is a self-celebratory monument of fan-service that tries its hardest to unite all Sonic aficionados under its banner and please older as well as newer fans — and fails utterly at it. The main issue lies in Generations' very concept, which is inherently flawed and a recipe for bombing. Offering flashy remade versions of old zones sounds like a Sonic fan's wet dream on paper; yet in practice, it's bound to disappoint basically everybody by sheer virtue of offering a limited selection of zones. It was pretty obvious that every single fan was going to be miffed that their favourite zones were not included and pissed off at the inclusion of some other zones they happen to dislike. Was I miffed and pissed off? Heck, you bet: I don't care whatsoever about the zones lifted from the 3D entries, but I would have killed to play remade versions of Flying Battery, Lava Reef and Dead Line — with a gloriously remixed soundtrack to boot. And was there really no better pick from the Rush games than Water Palace? How about Sky Babylon and its amazing theme track? And how about lifting Aquarium Park or Starlight Carnival from Colours, rather than the ultra-generic Tropical Resort? I could go on and on like that, just like probably every single Sonic fan that purchased that game. The only way to avoid such ramblings would have been to include every single zone created since the dawn of the series; and with a meagre seven zones for the 3DS version, the Sonic Team kinda missed the mark, if you ask me. 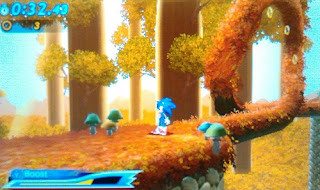 Mind you, Generations is a perfectly serviceable game with glossy graphics, sharp controls and a lovely celebratory vibe, and I polished it off nearly entirely, omitting only the irritating final boss; yet as decent as it is, there is no chance I'll ever touch it again. It's just too bland, too stingy and overall too unsatisfactory. What's the point of rushing through a measly selection of zones when I could just as easily replay the original games? Not to mention that the 'modern' 3D stages make me feel nauseous and that the Sonic Team managed to squeeze in a corny story that tries — and laughingly fails — to rationalize the presence of the two gameplay styles instead of letting zones flow and fans enjoy the game for the shameless fan-servicey treat it is.

With Generations and Lost World being dismissed as unsatisfactory instalments and on their way to the closest second-hand shop, I now find myself in the very weird situation of being able to bandy Shattered Crystal as my favourite 3DS Sonic entry. But hey, that's Sonic Team's fault for releasing experimental and half-hearted games instead of building upon the series' strengths. The DS entries did a great job at restoring the series' former glory; so why not expand on them, instead of resurrecting a dead unfinished game and wallowing in selective fan-service? Where is the third Rush instalment or the sequel to Colours, for instance? Heck, just because the 3DS has '3D' in its name doesn't mean that all games released on it have to go for full 3D, as the Boom subseries cleverly figured out. And now, if you'll excuse me, I have to curl into a ball in a corner and come to terms with the fact that I'll probably never get to play the flashy, shiny and lush Sonic Mania. Or will I? After all, I still didn't write off the Switch entirely, now did I? Maybe I'll play that game in a few years after all, if I follow my own plans and invest in a Switch towards the end of the system's lifetime. Thanks for reading, and be my guest anytime!
Posted by Isleif at 12:53