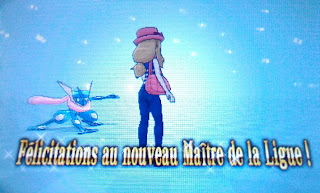 I wanted to perform a speedrun of sorts with that particular playthrough, just to see how much I could squeeze my playtime on Gen VI; and boy, did that work well. At 10 hours and 15 minutes, my Greninja run is undoubtedly my shortest Pokemon solo run ever. And well, isn't that good to know that I can get a quickie run out of the Gen VI entries as well! Now I just have to check if I can perform the same kind of time compression in the Gen VII games. But not right now; for some reason, I developed some kind of aversion to everything Gen VII after my recent Ultra Sun & Moon playthroughs. Weird, really.

But I digress. This post is all about Greninja, a beloved 'Mon if there ever was one; so beloved, in fact, that it was crowned Most Popular Pokemon in Japan and was granted a half-cringy, hald-badass exclusive transformation. I expected a lot from Kalos' resident Water Starter; and, well... Dare I say that I was a teeny-tiny bit disappointed? Yep, I'll say it: Greninja didn't live up to my expectations. It's not a bad 'Mon by any means, but it's not stellar either — at least in a solo run setting. Here are my two main issues with the ninja frog: 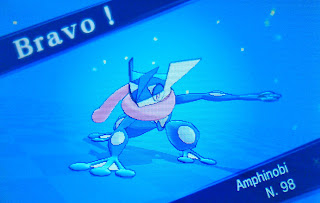 —Greninja's double typing doesn't do him any favour. The addition of the Dark Type gives him three extra weaknesses compared to a pure Water Type; weaknesses that are, in my opinion, not quite compensated by the two resistances and the one immunity gained in the process. Sure, it's nice to be resistant to Ghost and Dark; but in a game that features no Dark and Ghost Gyms and very few 'Mons belonging to those types, it's a bit of a waste. As for the Psychic immunity, it'll probably only ever come in handy in the Anistar Gym. Fighting and Fairy 'Mons, on the other hand, are bloody everywhere in Kalos; and wouldn't it have been nice not to be weak to these two particular types. Greninja can also only learn a paltry two Dark Moves by levelling up; not too glorious, methinks. I daresay that the issue stretches beyond Greninja: so far, I have yet to encounter a 'Mon that profits significantly from secondary Dark typing. Either the secondary Dark type doesn't add anything and is treated as an afterthought, or it plainly hampers and weakens the involved 'Mon. I surmise that Dark works better on its own or as a primary Type in double typing — although I have yet to check that assumption by tackling solo runs with such 'Mons. 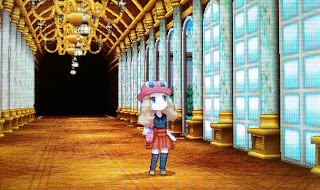 —For a Starter, Greninja is surprisingly weak and slow-growing. He's afflicted with the lowest HP and defensive stats of the three Kalos starters; and while his offensive stats are pretty decent and balanced, his offensive prowess is hampered by the fact that his learnset comprises mostly weak Moves — like, Moves with an average power of 40-60. The poor frog can only learn three paltry Moves with a power above 60 through levelling up, and he has to wait until lv.49 for the first of those Moves to be handed to him. Ouch. Only in the very late stages of the game did I manage to put together a Move pool containing solely Moves with a Power of 80 and beyond, thus pretty much guaranteeing one-shooting; before that, well... I hardly ever one-shot anything unless a Type advantage was involved. Or unless I used Return, my eternal ace in the hole in solo runs. 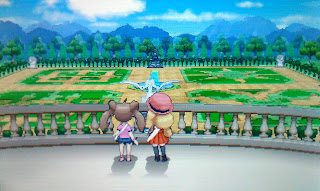 But enough complaining; my Greninja run was entertaining nonetheless, and the Kalos Water Starter does have undeniable qualities along his flaws: a varied learnset with good Type coverage, a sky-high speed that pretty much always offered me the first strike in battle on a silver platter, and an awesome and inventive overall design. Last but not least, he offered me a super-slick Elite Four showdown. With Surf (Water), Ice Beam (Ice), Extrasensory (Psychic) and Return (Normal) as my final Move pool, I was more than well armed to face the Kalos Pokemon League. I neatly took down Malva's Fire 'Mons, Wikstrom's Steel 'Mons and Drasna's Dragon 'Mons with Surf and Ice Beam; as for Siebold's and the Champion's teams, they were easily disposed of with Return. No Battles items, no fainting. At the end of the day, Greninja did the job, and that's all that matters. Now I just have to tackle a Chespin solo run, and I'll be done with the Kalos Starters! Thanks for reading, and be my guest anytime!
Posted by Isleif at 16:15