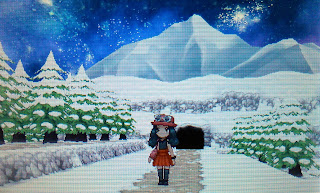 If you have an eye for detail, dear fellow gamers, you might have noticed that I've played Pokemon X every summer for the last four years; and, well, this is no coincidence. See, I played the game first in june 2015 as I was staying at my beloved grandfather's place; I have the fondest memories of that trip, and those memories somehow coalesced and crystallized around Pokemon X. The dear old fellow has since passed away; but the memories and the game are still there, and I now replay X every summer to remember those precious moments. This summer is no exception, and that's how I found myself tackling yet another X solo run. 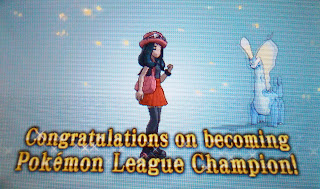 I wanted that run to be a return to basics, a return to all the things I love about Pokemon. I have a complicated relationship with the 3DS entries: although I love them dearly, they usually fail to enthrall and satisfy me as much as the DS and GBA entries. I reckon that this sorry state of affairs is solely due to the sheer length of the 3DS games: soloing them routinely takes around 20 hours, and that's a good 5 hours too much as far as I'm concerned. A good shearing was in order, and that's exactly what I decided to do during that playthrough. The formula was simple: no touching Pokemon Amie (I ignored the feature entirely during my first run of X anyway and things turned out just fine), Repel in all caves and tall grass areas, no shopping for clothes, Potion-gobbling on the road to avoid backtracking to Pokemon Centres, no exploring Lumiose City and, last but not least, an unwavering focus on Gyms and dungeons. It worked like a charm, with my run clocking at 16 hours and being my most enjoyable playthrough of X/Y so far. 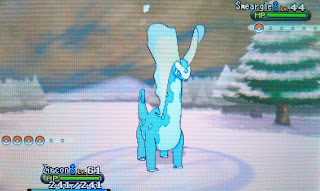 My lone 'Mon du jour was Amaura, one of Kalos' two resident fossils. It boasted a double Ice/Rock typing that was unusual and thus interesting, but also promised a bit of a challenge on the battlefield: with six weaknesses including a double weakness to Fighting and Steel, battling could easily get hairy. And, well, it did get hairy. The first roadblock was the Lucario fight in Geosenge, which I won using a purely defensive strategy: give Amaura the Rocky Helmet, then use an X Defense on the first turn to survive Lucario's first hit; then, heal on every turn while Lucario hurts himself to death on the Rocky Helmet. Kinda underhand; but hey, it worked. After that first hurdle, the rest of the Type obstructions was easily dealt with: rely on my boosted speed to one-shoot Fighting and Steel 'Mons before they can hit me, use the Rocky Helmet when necessary, occasionally bypass Trainers, and gobble X Defenses during the Elite Four fight against Wikstrom. All in all, cruising Kalos with Amaura was actually much smoother than I expected, due to his decent and balanced stats and powerful Moves. 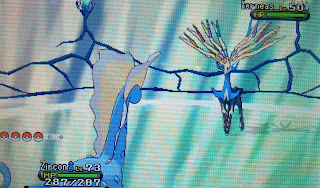 And since I'm mentioning Moves, I was a bit surprised by Amaura's orientation in that department. Instead of being an Sweeper or a Tank, as I hoped, he's a Status effect caster with a couple of offensive Special Moves thrown on top and the high Sp. Attack to match — think Male Meowstic rather than Charizard. I literally only wielded two Move pools during my whole run: Icy Wind, Aurora Beam (Ice), Round (Normal) and Ancient Power (Rock) in the first half of the game, and then Ice Beam (Ice), Thunderbolt (Electric), Return and Hyper Beam (Normal) in the second half. But wait, there's a catch: because of Amaura's Refrigerate Ability, all my Normal Moves automatically became Ice Moves. This means that I played the whole game with three Ice Moves at all times, which could have been a recipe for disaster; but surprisingly enough, it was not. I was never in a pinch on the battlefield, and my Amaura always hit hard enough to take down even 'Mons resistant to Ice. I had a Flying Hidden Power in my inventory just in case, but I never needed to resort to it. With the 'refrigerated' version of Return, I had access to an extremely powerful and precise Physical Ice Move, which was definitely an ace in the hole against many a 'Mon with low Defense. Despite its vast array of weaknesses, Amaura is a nicely polyvalent 'Mon that can probably fit in all manners of teams: he's a Status effect and Weather caster that can take hits, strike back with a vengeance and resist both Hail and Sand Storm. And as my run abundantly proves, he's also great solo run material. Well done, you.

My Amaura solo run might be over, but I'm far from being done with Kalos. Now that X and Y are back in my good graces, I can plot all the solo runs I want in that Frenchiest of Pokemon regions — starting with a run of Y starring Amaura's counterpart and polar opposite Tyrunt. See you soon for more Kalos goodness, dear fellow gamers! Thanks for reading, and be my guest anytime!
Posted by Isleif at 17:13