Shiren the Wanderer (3): The end of the road 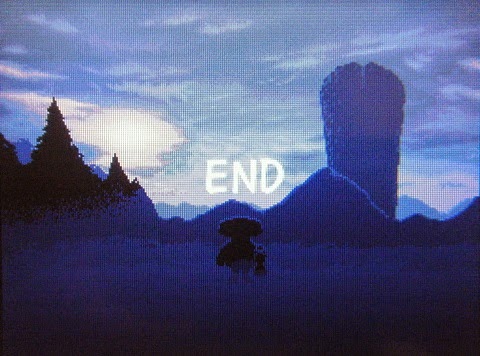 My wandering days are over at long last. I finally beat Shiren the Wanderer, after 54 hours and 174 adventures. And boy, what a ride it has been! From peaks of elation to pits of dismay, my long trip through Table Mountain was undoubtedly one of the rockiest video game runs I’ve ever had, but also one of the most fulfilling. Without further ado, let’s dive into the last segment of my run and see how things unfolded until my ultimate victory.

I climbed it my way

After my two resounding failures at tackling Table Mountain, I kept trying, patiently upgrading my equipment again before venturing ahead… and failed a third time, this time at the hands of a different enemy that I cannot remember. This third defeat was downright annoying; the whole pattern of upgrading my equipment only to die while facing unknown monsters was getting old, and I needed a breath of fresh air. I then resolved to play the game in a slightly different way and see if it would work better. This different way was the one advocated by seasoned Shiren players, i.e. not buffing up your equipment and relying solely on whatever you find during the course of your current adventure. On top of offering a welcome change of pace, this way of playing would force me to develop my strategic skills and to use all the items at my disposal instead of relying solely on my sword. The results were encouraging, to say the least: I progressed much further than I would have expected, even going as far as the 25th floor during one adventure. This way of playing was also immensely rewarding, as I found unexpected ways to escape from the most desperate situations: I swear that I had some kind of epiphany when I managed to escape from a Monster House-floor solely by using a Switching Staff to switch places with a monster that stood next to the exit. Strategy does go a long way in Shiren, indeed; after that, I became convinced that I could beat the game without resorting to upgraded equipment if I tried hard enough.

However, there was a major issue with that way of playing. As fun and stimulating as it was, it was also way too similar to the accursed platformers of my youth for my taste and comfort. I was never too fond of the whole “die-and-retry” thing, and I’m even less fond of it now that I have a greater variety of games to play and less time on my hands. On top of that, I had already been playing Shiren for more than 40 hours at that point, and gaming fatigue was starting to loom on the horizon. I needed closure, and I needed it soon, or else I would drop Shiren again for another couple of months—or maybe forever.

That was when, unbeknownst to me, I devised the ultimate strategy that would finally lead me to victory: to combine upgraded equipment and useful items with cutting-edge strategies. To play as if I were weak and vulnerable, relying solely on my super-buffed equipment if no better tactics were available. This strategy catered to all sides of my gaming personality, mixing my love for planning and patiently building up my strengths with my immoderate taste for puzzle and strategy-laden games, and it promised to be the most fulfilling way of playing as far as I was concerned. I went into upgrading full force and ended up with a Lv. 55 Armor Ward and a Lv. 65 Kabra Sword—both carrying a couple of useful seals for good measure. I also collected a couple of carefully selected items in the process; and after a last goodbye meal at Naoki’s restaurant, I finally ventured ahead, my bag loaded with jars, my belly full and my heart fluttering with anticipation. 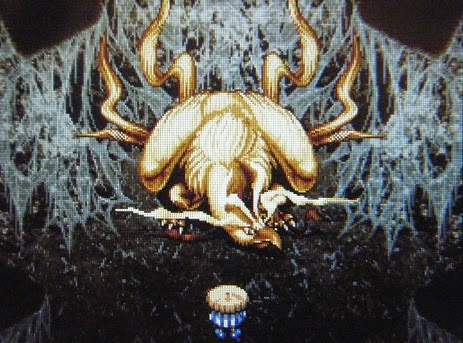 Despite what I had pondered in my last post, I cleared the whole stretch between Mountaintop Town and the Waterfall Cave in one go. It was then or never, and the Winds of Fortune seemed to be on my side on that fateful day. I climbed and climbed, working my way through countless hazards and disposing of enemies as cleverly and safely as I could. I ended up in a tight spot a couple of times, the most dangerous occurrence being when I was stuck at the entrance of a Monster House and repeatedly paralysed by three Mecharoids ganging up on me. I only managed to snatch a turn every once in a while, and my survival was solely due to my over-buffed Armor Ward that protected me from the numerous blows I had to endure before I managed to get rid of these pests. But I cleaved my way through this obstacle and the rest, until I finally found myself on the last floor again, facing that dreaded Tainted Insect and its disgusting cronies for the most epic showdown of them all.

This time, I was fully prepared and in control. I located the accursed Skull Wraith and swung my Postpone Staff at it first thing. Things didn’t work exactly as planned, though: since the last level doesn’t have an exit to speak of, the creature was not whisked away. However, it was paralysed for good, which allowed me to concentrate on the threatening Tainted Insect that had crawled closer to me in the meantime. I faced the foul thing and unleashed my ultimate strategy, devised eons ago in the safety of Canyon Hamlet: I grabbed a piece of Mamel Meat from my inventory and threw it at the creature. The roast hit its target, and the massive insect turned instantly into an innocuous and powerless Mamel, jumping and quivering in distress at the thought of the terrible fate that awaited it (my imagination going wild). One neat slash of my overpowered Kabra Sword, and the creature perished, along with all its cronies. I was paralysed for a couple of seconds, my mind still reeling from the magnitude of what I had just accomplished. I had killed the last boss! I had done it! After recovering from the shock, I started moving around carefully, looking for the fabled Golden Condor. My steps were slower and more careful than ever: for all I knew, the room could be bristling with traps, and the last thing I wanted was to die stupidly after such a grand victory. Nothing unpleasant happened, though: I found the Golden Condor and left the place on its back, my hair flying in the wind. Then came the sweet, long-awaited ending (spoilers): people marvel at the sight of the Condor flying in the golden glow of the evening sun, everybody makes a wish, the Condor drops Shiren and flies towards freedom and lands unknown and Shiren walks away in the setting sun. Blame this on the “Lucky Luke” comics and cartoons that I used to devour when I was a kid, but I’ve always been a sucker for these ‘Hero-walks-toward-the-sunset’ endings. Blimey, I could even feel unshed tears of joy, relief and overall happiness welling up in my eyes, and it felt amazingly good. Oh, what a ride!

I then accessed the vast postgame territory, with its new dungeons, travel means and opportunities. The first pleasant change is the brand-new dialogues: every NPC you talk to congratulates you for your amazing feat and expresses their awe in front of your amazing self. That’s certainly a nice change from their former lines that blended lukewarm encouragements with an ever-so-slight touch of doubt and compassion—heck, you could nearly hear them shaking their heads and thinking “ha, the delusions of youth. Soon this poor lad will be vulture’s food”. Another neat feature is the possibility to travel instantly from Canyon Hamlet to any other village in order to rally the postgame dungeons. Did I mention that you also get to keep your precious equipment as well as all your items after you free the Golden Condor? Although it seems pretty normal overall, I wouldn’t have been surprised in the slightest if the game had stripped me of my gear with a crappy justification—or no justification at all, for that matter. After all, we’re talking about Shiren, one of the most unforgiving games out there. At any rate, this display of fairness was most welcome, and I put it to good use by clearing another ascent of Table Mountain. Of course, the Tainted Insect was gone, as well as the Golden Condor; the only thing I found was a golden feather left for me to pick up, marking thus the end to that second victorious run. For curiosity’s sake, I decided to sneak a peek at some of the postgame dungeons. I ventured through the Tainted Path first: it was challenging all right, with considerably more powerful versions of already encountered enemies, but it was also quite boring. The thrill of wanting to beat the game was gone, and after having cleared 25 floors in a row, I started yawning and wondering how long was this dungeon exactly. I finally died on the 30th floor, and it felt like a huge relief—especially since my masochistic dungeon-crawling impulses would probably have pushed me to go on and on, no matter how boring the roaming was. At any rate, it is crystal-clear that these postgame dungeons are considerably harder that Table Mountain and are designed to be explored while relying on heavily upgraded equipment. I then tried the God Kitchen Shrine, cleared three floors and died, and put the game down for good without trying any other dungeon. I had gotten my fill of Shiren and didn’t feel like playing it any longer. From what I’ve read, most of the postgame dungeons are considerably longer than Table Mountain itself; it’s nearly like the game is starting for good once you free the Golden Condor—a feeling reinforced by the fact that the postgame dungeons contain tons of items that are nowhere to be found in the main game, from shields and swords with interesting seals to brand-new types of Scrolls and Staves. Well, I’ll pass this time, thank you very much. Maybe we’ll meet again on my next run, Tainted Path and co; for now, I’m moving to new pastures with a huge smile on my face and no regrets. My work here is done—till next time.

There will be a next time, indeed, both in terms of gaming and writing. I will undoubtedly play Shiren again, as well as try my hand at its sequels—which are all part of my precious collection and will hopefully turn out to be as excellent as their elder, if not more. As for writing, I will come back soon with a final post wrapping up that most amazing experience of playing Shiren the Wanderer. Thanks for reading, and be my guest anytime!
Posted by Isleif at 11:09